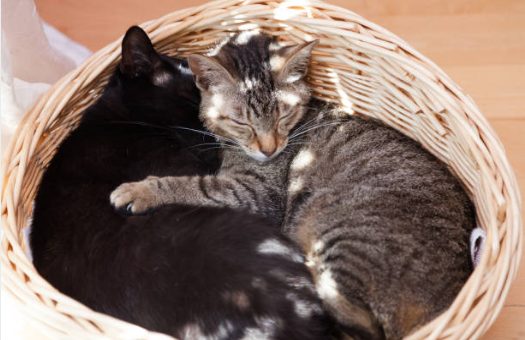 My brother had to leave his black tomcat, Robby with us for the weekend. Robby knows us and had slept over before. But since Robby last stayed over, a silver lady cat, named Becca, adopted our next-door neighbor Jeff and since moving in with him the pair were best friends. Becca could be referred to as a feline version of a frequent “flyer” over our garden wall, that is, the one which separates Jeff’s property from ours.

So, after dropping him off, Robby chose a sunny spot on the porch to soak up some Spring morning sun. He had no sooner started counting Zee’s when Becca the “flyer” added another flyer bonus to her collection.

The moment of truth as boy meets girl… As quiet as a mouse, Becca sauntered up to Robby’s snout, what! no snarls? Instead, we are treated to a mutual grooming session… There they lay side by side until it was time for Robby’s lunch.

Another complete surprise as Becca joins in, eating from the same bowl!

That evening Jeff peeped over the wall to ask about Becca. The two cats were sitting close together watching the evening news… We decided to allow Becca to the sleepover and since both cats have had their kitty making factory closed down, we thought, why not?

After the news, Robby climbed into his bed with Becca, close in tow. Soon they were in kitty dreamland where they stayed motionless till Sunday morning. For the rest of the day, the two explored every inch of our yard together. Soon it was time for Robby to leave.

We are treated to another precious moment, as Becca and Robby rubbed snouts, crossed tails, then snouts again and then he hopped up to sit next to his person, my brother. Becca sat watching her buddy disappear down the road before slinking off to the garden wall. A casual, glance back at us then gracefully chalked up another “frequent flyer trip” back home to Jeff.