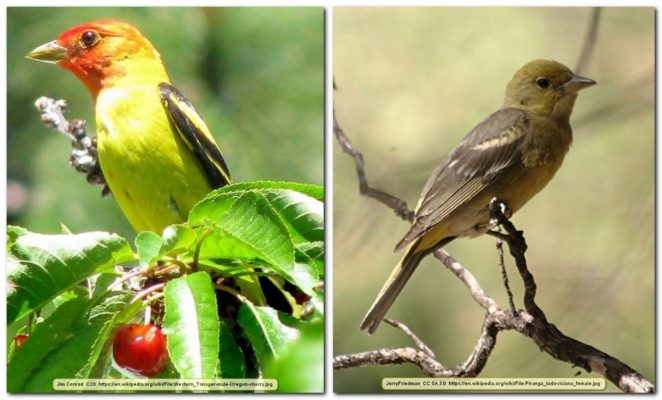 When it comes to pretty songbirds, one of the prettier ones is the Western Tanager (Piranga ludoviciana). This is a migratory songbird found primarily in the western US. It breeds in the northwest US and well north into Canada and into Alaska, but spends the winter as far south as Costa Rico and throughout most of Central America. They are commonly seen every year in Montana.

When the males are in breeding colors, they have a lot of yellow on the body and the heads are reddish. The back is mostly black or dark. The females are drabber but are still pretty with sort of an olive coloration.

They build flimsy cup nests that hang from branches, particularly in conifers like pine, and they usually lay 3-5 eggs, which hatch in about two weeks.

Although they are called ‘songbirds’, the call is rather monotone and often consists of only three notes.

This bird used to be considered part of its own family, the tanagers, but it is now considered to belong to the cardinal family.

Western Tanagers feed on insects, seeds, fruit, leaves, and even buds from twigs.