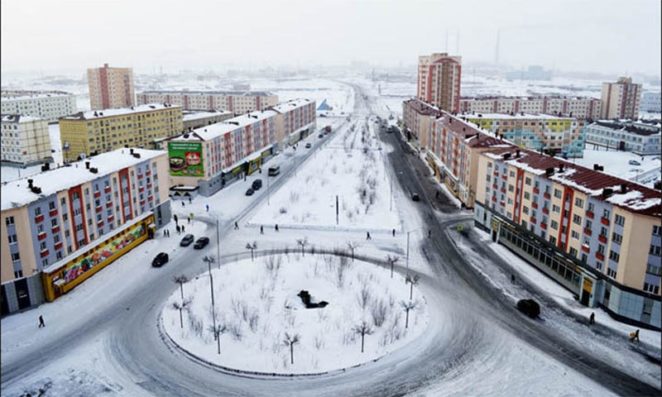 The Northern Hemisphere is presently suffering from severe cold and the daylight is diminishing with cooling. but the weather of Russian city , Norilsk, can not be usually seen in other part of the world, where residents cannot even see the sunshine until mid-January and it is also called the coldest city in the world.

This is one of these 2 Siberian cities that remain frozen all year long and in the winter, more than 175.000 residents here experience, on average, – 61 degrees Celsius, and overall the temperature throughout the year is – 10°C. and that’s why it’s also called the coldest city of the world.

Then the snow and the city is covered with snow 270 days a year and every three of one day, residents her face a snowstorm. This city is completely cut off from the world. Every city in the world with a population of one hundred thousand or more, are usually connected via roads, but Norilsk is located in the extreme north and despite the large area there is no road.

This city is located 1800 miles from Moscow and getting here is possible by plane or boat and it’s so different from the rest of the world that its inhabitants often call Russia the mainland.

But beyond that there is a lot of hustle and bustle in this city like Public transport, cafes, art galleries, a large cinema and other modern amenities, while newcomers are constantly coming to live here, which reason is good income. Because the city has deposits of platinum, nickel and palladium and it is also known as Russia’s richest city.