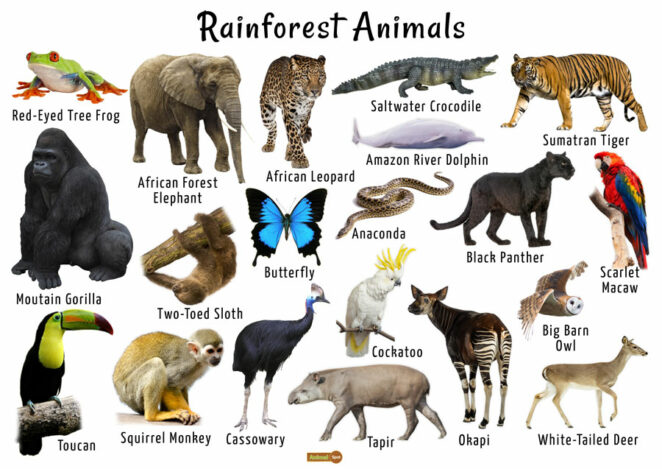 Thanks to RasmaSandra and her suggestion, I will share a series of some of the Rainforest animals. They are all fascinating. It was hard to decide which ones to share. You can see in the photo above many of the beautiful animals.

The number of animals in the Amazon Rainforest is huge. It is estimated that the region is home to one tenth of all of the Earth’s species.

The Rainforest Alliance works hard to protect rainforests and the biodiversity within them through the sustainable management of tropical forests, restoring degraded land surrounding forests, and protecting rivers and streams.

In this series, I will share 11 of the most amazing rainforest species they are helping to protect with their innovative approach to conservation:

1. Mountain gorillas are the largest living primates on earth! Along with chimpanzees, orangutan, and bonobos, they are the closest living relatives of humans, with mountain gorillas having the most developed brain of the four.

They live primarily on the lush mountain sides of national parks in Rwanda, Uganda, and the Democratic Republic of Congo in Central Africa. Mountain gorillas live in groups of roughly 30 members, with one dominant, male troop leader called a ‘silverback’ for the silver color in his coat.