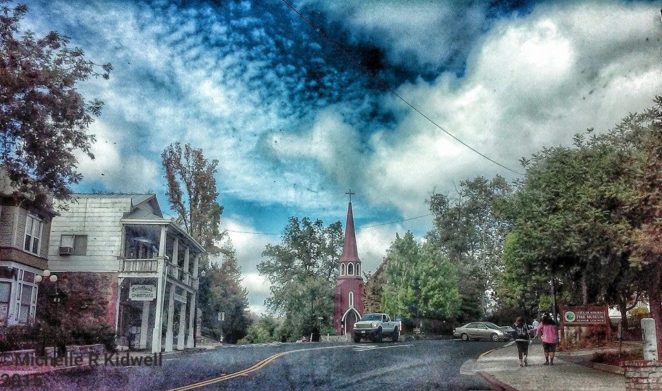 I live in the beautiful Sierra foothills of Northern California, a seventy mile drive to Yosemite!  So I thought I would take you on a visual journey through this place I call home.

We have several older churches up here some over 150 years old, the first church I am going to share is the Old Methodist Church located in Jamestown Ca.  I did some editing to make it look like a post card!  By the way Little House on the Prarie as well as Back to the Future were in part filmed in Jamestown

And the Red Church located in Sonora Ca, Michael Landon attended this church from time to time while filming Little House on the Prarie.

And here is the fellowship hall as well as the Pastor Offices of the red church.  It’s official name is Saint James Episcopal Church but everyone up here calls it the red Church and it was built in the 1850’s as well.

And yes we have a few street lamps still, like this one once again located on the property of the Red Church

Up the Hill heading towards Angels Camp and Murphy’s is New Melones Resevoir!

A Lazy Sunday afternoon in a small town.  On Sunday afternoon few things are open on Washington Street, but we have plenty Open in other parts of town it’s kind of a mix of the new and old.  Unfortunately all to often the new pushes out the old!

Thankfully in the 1940’s or thereabout’s Columbia became a state historic park leaving it with some protection. It’s a place you can go and step Back in Time.
Here’s a pic of people enjoying a walk in the streets of old Town Columbia!

And some nineteenth century costumes!

One of the old Gold Miner’s Cabins in Old Town Columbia.  If you are familiar with California History you will know that in 1849 many miners came to Columbia in search of Gold.

After families started coming of course a school had to be opened this was one of the first a two story (rare for the time) two room school house, lower grades downstairs and higher upstairs.  In 1903 the nearby highschool Sonora Union Highschool (My Alma-Matter) would be founded as well but this school opened in the 1850’s and closed its doors when the newer/ bigger elementary school opened in the 1930’s.  It became part of the state historic parks and is visited some say the first teacher can be heard walking around the school keeping an eye on her students.  Behind the school is a cementery.

The boys and girls outhouses  rest assured they have placed modern bathrooms on the property as well, bathrooms that do not take away from the asthetics.

After a long journey it might be nice to visit the community college which is more modern found in the 1960’s but equally as beautifully a large part of the property is a reserve so think nothing of seeing Ducks and Geese up close but be careful during mating season Lol!

There are also tons of California Pines sadly disease and drought have killed off some of the beauties but it’s still beautiful.

Fishing is not allowed but no rules against pretending which was what Little Miss did!

I attended college here and this view inspired dozens if not hundreds of poems.  It truly is spectacular.

I hope you enjoyed this journey through some of the beautiful Motherlodes!