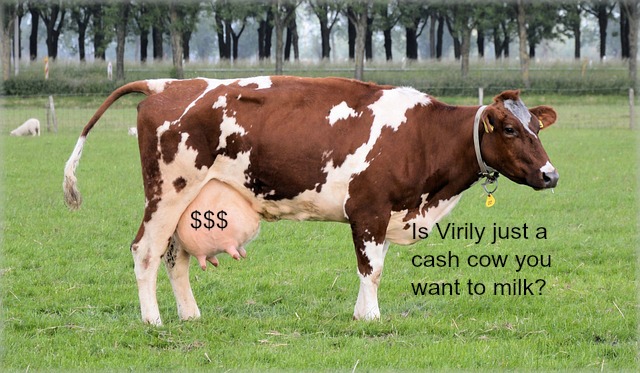 Many of my friends here I first met on Bubblews, Tsu, or myLot. Of these, only myLot is still around. Have you ever wondered why? MyLot only rewards people for contributing value to the site, and they don’t tell you what they consider valuable enough to pay for except that you get paid there only when others interact with you. If you start an interesting discussion that makes people want to read and comment on it, you earn. You could write a thousand words, but would earn nothing if no one commented on it. There aren’t any rules about post length or comment length, but people earn for their efforts and the site is still earning enough to pay them.

Meanwhile, Bubblews and Tsu and numerous blogging sites are gone or no longer pay those who write on them. They all had numerous rules, but people found ways to get around them by gaming the system. The moderators couldn’t keep up with all the violations. We could still argue about the honesty of the Bubblews owner, but I think those who found ways to game the system also helped prevent the site from earning enough to keep paying people for participation. Tsu had a different payment scheme and had essentially a multi-level marketing plan where those who joined first earned from everything those who joined under them did. Those in the downlines got paid less for the same effort expended that those above them. I never thought it was fair, and I and many others stopped being active long before the site died.

What both sites had in common, though, were those who didn’t follow the rules. On Tsu, plagiarism was rampant. People stole photos illegally off the web and used them as their own to earn. They did not credit their sources and tried to earn from the work of others.

Plagiarism was also a big problem on Bubblews. So was spinning content.  People also violated rules with comments. They left generic comments with the added note to “Please read and comment on my posts.” I won’t go into the other ways people cheated, since I don’t  want to give those who want to game the system any ideas they may not have had yet.

Part of the reason the rule violators hurt a site is because they make it less attractive to advertisers. Sites can’t pay people unless they earn money, so they need enough interesting original content to bring people to the site from the outside. Google pays more for clicks from people in some countries than in others. So it seems members from the USA, the United Kingdom, and other prosperous countries bring in more revenue that those in less prosperous countries. When a site’s members are mostly from countries that don’t earn much from advertisers, the site needs original content of high quality to bring people from outside the site in. Virily has to get more views from non-members who will see the ads.

Virily Needs to Make Money in Order to Pay its Members

One of our members (tasartcraft) generated quite a discussion of why it’s OK sometimes to not follow the intent of the Virily’s guidelines. The guidelines are in place to make this site  attractive to advertisers. I disagree with some of @tasartcraft‘s opinions.   I believe the way to show genuine appreciation for content someone has written is to actually read it and then, if you have something to say, to upvote and/or make an original comment of twenty characters, most of which should be actual words — not filler punctuation. That’s what the guidelines attempt to promote.

I personally think it would be better for the site’s  earnings not to pay anyone for making a comment. That might mean that people really will be expressing appreciation with their comments or actually saying something they care about instead of commenting just to earn more. If a member has nothing to say, why not just upvote the post or photo and not comment? That shows appreciation and stays within the guidelines. Or, if we no longer got paid for making comments, the length shouldn’t matter. I know it’s hard to make an original comment when all you want to do is let someone know their photo is lovely.

It’s the intent of site owners to have people actually read content — not just open it. Yet I see that when I open a post, I immediately get a notification that I got a Viril for  reading it. Google wants people to at least have a page open for a few seconds — long enough to read at least a paragraph.

For this site to make money, a few things have to happen. Members can’t  control all of them. The site has to work properly and members need to see information on what each kind of post requires and how to properly use each post format. Only site owners can provide this.  They can also change what they give Virils for so that members won’t get Virils for actions that don’t actually help the site.

People who violate the guidelines or their intent don’t earn the most money for the site but they earn the most money from the site. Those who post quality content consistently, post their own/or attributed photos they have permission to use, and make original comments, help the site earn money. But this takes time and they may earn less than those who do as little as they can to get paid. This may discourage those who contribute most to the site’s ability to make money, since they see others make much more money by doing the very minimum necessary to get paid. Some follow their example, and some leave Virily and spend their time at sites that are more established or they work on their own blogs. I know many who posted quality content who don’t still post, but only come to comment.

Aesop tells the story of a goose who laid a golden egg for its owners each day.  The owners got very rich, but then they got greedy. They wanted to get richer faster. They killed the goose to get all the eggs inside at once. But after they killed the goose, there were no golden eggs inside. The goose was gone and they had nothing.

Virily doesn’t exactly lay us a golden egg each day, and no one will ever get rich here. But some people earn enough to keep them writing here. Some people earn enough to actually reach a payout. I think most of them follow the spirit of the guidelines, not just the letter. Most don’t take shortcuts or game the system, even though they are just as busy as those who justify being busy as an excuse for taking shortcuts.

I sincerely hope hope Virily stays around for a long time, but I expect if it continues to reward those who find ways to get around the guidelines and make excuses for it, Virily will disappear like Tsu and Bubblews and many other sites did. The moral of Aesop’s story about the goose is “Too much greed results in nothing.” It’s not wrong to want to earn, but how you do it may determine how long the site will survive.

You may be unintentionally doing things that hurt the site. If you take shortcuts, only you know your motivation. I’m cautioning people, not accusing anyone. Let’s keep the site healthy.

Are you feeding the goose and waiting for the eggs over time? Or are you helping to kill it with your efforts to get around the guidelines to earn more quickly? Which will gain you most over the long haul?