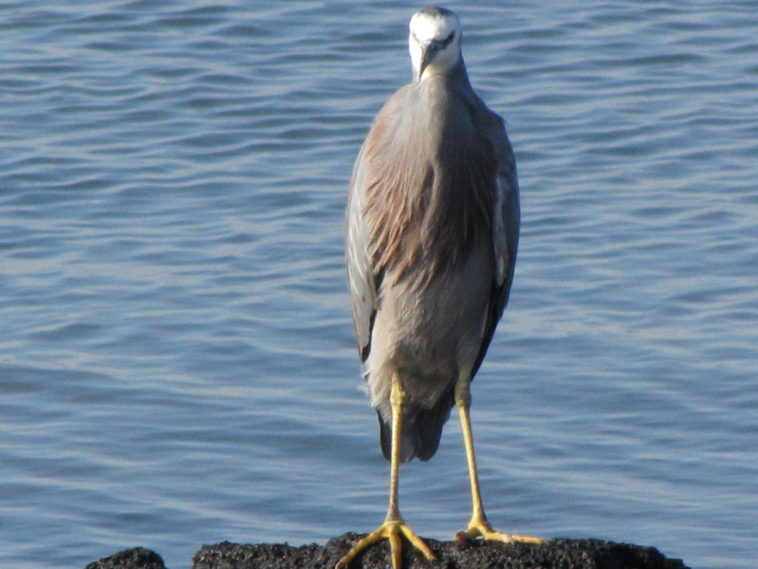 There are many Grey Herons where I live. They are seen in the Waitamata Harbour, in Creeks, in rivers, in The Manukau Harbour, and in fact there are few places with water where I have not seen one or two of these birds. They are wading birds looking for something to eat. I often find them in pairs along the Manukau harbour, it seems to me, that the birds own an area which is their own ground to gather what ever there is to be eaten.

This bird lives in Cox’s Bay, Herne Bay, Auckland. The one above is the same one as the bird below in flight.

Grey Herons are native to New Zealand and it’s species are not threatened. It’s known as ;Grey Heron, White-faced Heron, Matuku Moana, Matuku, Blue Heron, Blue Crane. It has 2 sub species, one confined to New Calodonia and the Loyalty Islands and another elsewhere. They aren’t quite the same as what the New Zealand is but like our Grey Heron.

This Grey Heron is in the Manukau Harbour by Mangere Bridge.

It’s a tall grey blue, elegant bird that is commonly seen in any aquatic area, including damp pasture and playing fields seeking food. It is used to seeing people so sometimes allows a close approach. It’s voice is a harsh sharp croak, usually when it flies.

It has white on it’s face and the front of it’s neck. In breeding plumage the adults have strap like grey plumes on the back and shorter pinkish brown plumes on the front.The dagger like bill is dark grey, dull yellow at the base. The legs are pale yellow.

These Grey Herons are also in Mangere Bridge, the Manukau Harbour.

The White Faced Herons are usually tree dwellers and I’ve seen them in pine trees around the Manukau Harbour. They like the tree tops. They have been known to roost on Man-Made structures. A loose platform is constructed where both parents incubate 3-5 eggs. There is usually one nest per tree and nesting may start as early as June in the Northern parts of New Zealand. As you go further South, the nesting is later. Incubation usually takes 26 days and it’s unusual to have more than 2 chicks per brood.

I found several Grey Herons in some pine trees by a park next to the Manukau Harbour in Weymouth and right next to Royal Spoon Bills. The above photo is taken from this park.

Foraging Grey Herons walk with slow calculated steps watching for any signs of prey, if spotted is taken with lightning speed. When there are a lot of Grey Herons are in a particular area, aggressive steps are shown to any intruder Grey Herons. They nest in tree tops and may perform aerial displays above their nest during courtship.