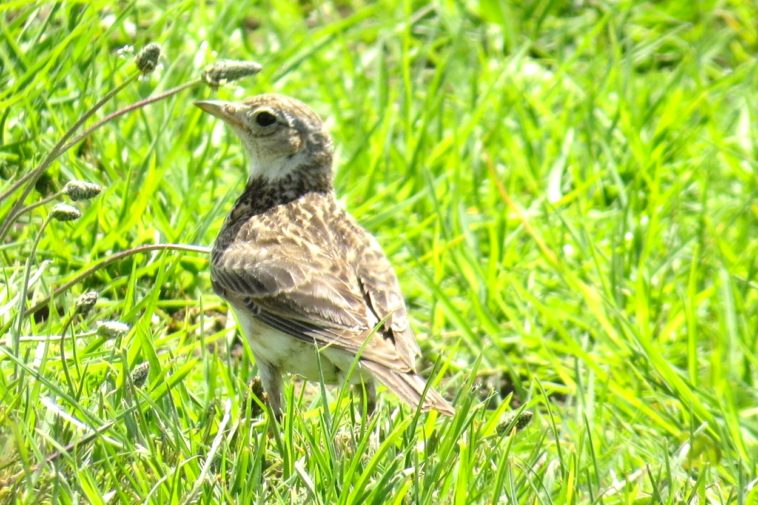 When I first saw a Pipit it was on Bethel’s Beach, West Auckland. It seemed like a Sparrow but it wasn’t a Sparrow. It’s slimmer and has longer legs.

It’s a brown and white song bird. The colour of the Pipit seemed to blend in with the sand and that was it’s disguise.Yes, it’s eyebrows were different from a Sparrow, it has a white eyebrow which is quite apparent.

These are birds of open country, sandy beaches, rough pasture, river beds and above the tree line. I found the Pipit in the above picture in the Waioru gas station walking around the petrol station and then on the footpath.

This Pipit above I found at Bethel’s Beach and you can see how it is easily disguised by the sand. Yet it was it’s quick movement of walking on the sand, that drew my attention. It does not hop like the Blackbird or Thrush, it walks.

It’s voice is a strident tzweep or tswee. It sings high above.

I guess it’s a lot to say but other birds understand it.

Here’s one in the top of a bush at Bethel’s beach the very same as the one in the sand.

The Pipit I saw ran infant and along side of me walking very fast almost a run.

This Pipit at Bethel’s beach is saying it’s ten cents worth to me while on the sand near me.

This bird breeds from August to March. It generally has 3 eggs on average. Both sexes feed their young. Incubation takes 14-16 days, Their nest is a sizeable woven cup of grass under tussocks and grass clumps within fern and partly covered with vegetation.

Threats to these birds are from forest clearance, heavily grazed pasture, and drained wetlands. They disappear from islands when rats are present and declined in drought prone areas. They are also hunted by the New Zealand falcon.

This bird above I found in the grass somewhere in the Hunua Ranges.