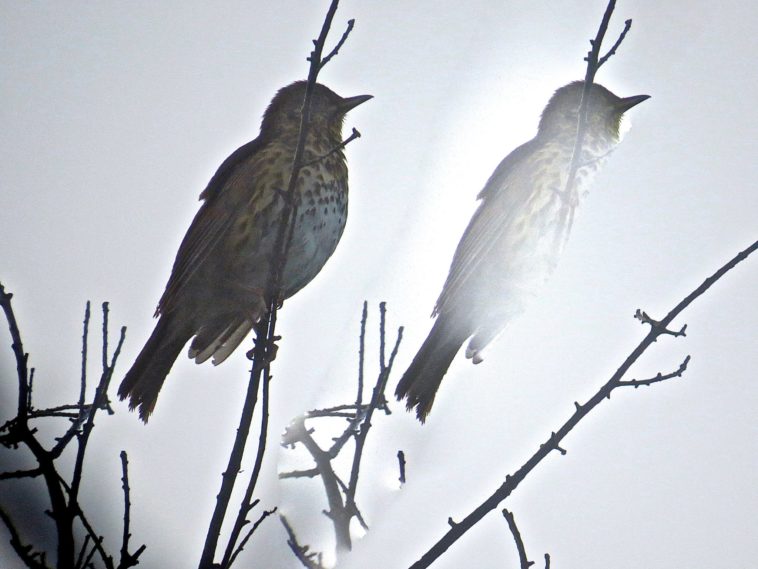 This was a morning where there was a fog where we lived. I see it as a photographic opportunity and went around seeking the good shot.

Here we have some foliage here with slight misty background. It’s just an interesting composition.

I love a clear space in the ground where it’s a clear field and it’s great to have the beauty of nature around you. It’s a breath of fresh air.

Some place in a field of refuge, one breathing space in the city. Hope it stays that way for a very long time. I would like hens to live here but Im sure under the ground there is metal in the earth, that is bad for hens as it can kill them slowly and it is also not a good idea to eat hens eggs when the chicken has lead poisoning.

I never thought I captured this Thrush on top of a tree in the middle of the mist. Because of the mist, this bird completely ignored me and went on with it’s song. A Thrush is very melodious.

Around our garden the effects of fog and I try an experiment.

Fog occurs when there is no wind about, there was little or no wind. This is a street near where we live in Onehunga. Lovely tree lined streets. Would you believe I saw a Tui fly over across the road, it’s wings going like a bellows. Several Starlings were around as well.

This is Galway and Arthur Street, an intersection with rules about traffic that many people break. Not today.

I didn’t think this photo would work out but I was wrong, it’s fine even with the lettering.

You can make up mystery and romance stories all about the mist. It’s a surreal world where often things are not as they seem. Surprisingly enough the planes came and went from the Auckland international airport because we have good radar equipment..

So how does fog appear and what causes it. Well, fog consists of condensed water droplets, caused by air being cooled to the point it can no longer hold all the water vapour it contains. Just as clouds form from the rising of air, which cools from expansion. Now fog can stay around for a while in the morning.

Fog forms when cool air passes over a warm body of water or moist land. Yes, well in Auckland, we have both. Yes, we have a lot of humidity in Auckland and without a lot of wind, we definitely will get fog.

My Dad flew Landcaster bombers from Canada to Edinburgh in World War 2, often having to land in pea soup fog. It would be so thick you could not see your hand in front of you. The enemy would shoot anyone who used radar so they used morse code. So I asked him what he did, and was told he heard long dashes on one side and short dashes on the other side. He managed but said sometimes they didn’t even get morse code so he just guessed. When he told me that, there was silence for a while and Mum said that some of these guys didn’t make it and they died. War is a horrible business but I believe if you trust your gut, it’s the best you can do and it often saves your bacon!