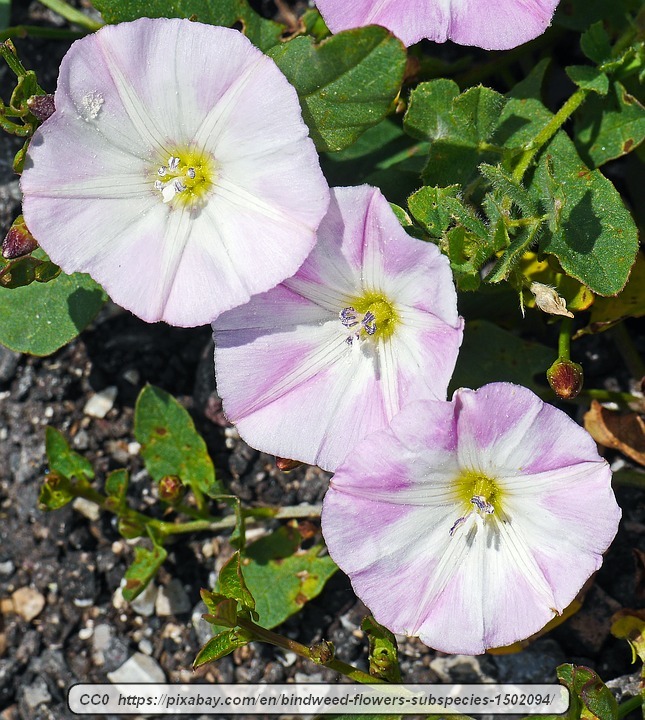 Even troublesome plants are often quite fetching. For instance, poison ivy and poison sumac are lovely. These are worse than weeds and aren’t something most people would think of growing in their yards to add beauty. The point is that the plants that aren’t wanted can still be appreciated for their beauty. This includes many regular weeds that can be viewed with pleasure without causing the problems poison ivy and sumac can.

Bindweed, also known as wild morning glory, is a European native that made its way to the US. It is a climbing plant that often grows well near fences. The medium green leaves are somewhat arrowhead shaped. The plant is invasive and once established, is incredibly difficult to irradicate. It is the smallish tube or trumpet-shaped pink to white flowers that add most of the beauty, though. Since the plant climbs readily, the blooms add color to the yard, especially along borders. If the plants don’t have support, they will grow close to the ground and over it, forming a ground cover. While this is an invasive weed that can spread, it is worthy of consideration for growing along fence rows.

This is a plant that is also widely distributed. Wild mustard has clusters of small yellow flowers that are quite pretty. At the same time, the medium to dark green leaves are edible as a pot herb and contrast nicely with the yellow flowers. The flowers also look great when they grow next to the blue, white and red blossoms of other plants.

With many hundreds of species in the genus, buttercups have an enormous range and one species or another will grow almost anywhere. These plants tend to be low growing and bloom with a yellow, white, pink, red or blue flower. They lend a great contrast with taller growing flowers and weeds and can form a ground cover in barren areas. Many people purposely plant larkspurs and columbines, and these are members of the buttercup family, testifying to the beauty and diversity of buttercups.

In some areas, poppies grow and spread so fast that they can quickly become a problem weed if they aren’t watched carefully. Yet the white, orange or red blooms are great for giving color to yards and gardens, especially when used in borders and along fence rows. While widely considered a weed, these plants are colorful enough that they are sometimes purposely planted and grown.

The milkweed is also considered to be a weed in yards and gardens. Yet, with so many species and variations, it can add a lot of color to the land. The color of the blooms ranges from yellow to white, red, deep red and other attractive combinations. Milkweeds can add beauty to the yard and garden in another way, too. They strongly attract butterflies, particularly Monarchs. Butterfly caterpillars commonly feed on milkweeds, so the adult females are attracted to the plant in order to lay eggs.

Also called bittersweet nightshade or woody nightshade, climbing nightshade is a weed that is often considered to be an invasive or noxious species. Still, it does lend a lot of color to the yard and garden, with flowers that are small, blue and yellow. Later, the green fruits form, and as these ripen, they turn red. The fruit appears much like miniature tomatoes, which isn’t surprising since they belong to the same family that tomatoes and potatoes belong to; the nightshades. This is far from being a complete list of weeds that add beauty to the yard and garden. Weeds, properly contained and controlled, can add a great deal of color to the area. There are also very few places that don’t have some weeds that can create astonishing displays if they are under control and are grown where they are wanted.