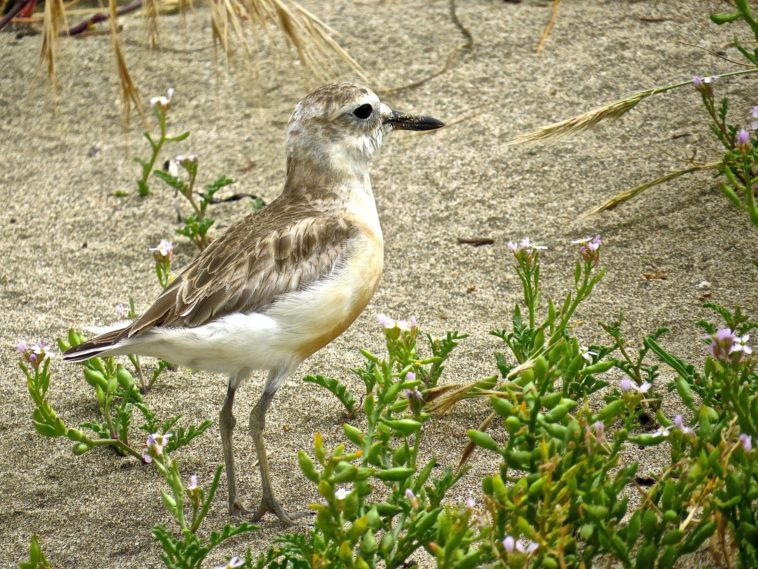 This is the New Zealand Dotterel, it still has some of it’s breeding plumage of orange on it’s breast. It lives in the sandy beaches of the North Island mainly on the East Coast but sparsley disturbed around the rest of New Zealand’s coasts. It is a beautiful delicate bird and one that still needs protection although people have done quite a bit to see that they are protected here. There is a South Island Dotterel but that mainly breeds in Stewart Island, more South than the main land.

The dotterel is a heavily built plover. It has a small sharp chirp. Often I have gone to the beach and seen something running across the sand, then I look and the dotterel is almost invisible with the sand. It runs up and down and often they go in pairs.

One day we went to Wendleholm and I saw 2 of these dotterels. One sat in the sand in front of me while I took it’s photo. It looked kind and helpful. I thanked the dotterel afterwards. Wendleholm is a beautiful beach an hour north of Auckland and it’s water is crystal clear.

Another time we went through Kawakawa bay, South East Auckland where I spotted 2 dotterels near the grass land but on the beach.

You will see it’s wings are the colour of sand while it’s front is white with it’s breeding plumage.

These birds have predators often dogs, cats, rats, or other birds and human disturbance. Most protected beaches have predator control and they fence off their breeding areas. They lay 3 eggs from August to September , and are replaced if lost, incubation takes up to 28-30 days. The fledgling averages about 6 weeks.

They breed in pairs and will defend their territory from other dotterels. They often nest in the sand of by a bit of driftwood or near vegetation. It would be easy for someone to walk on their eggs without seeing them.

Dotterels eat suitably sized marine life, small fish and insects near where they live. They eat worms, crabs, flies, beetles and crickets and mainly live and breed near estuaries on beaches. They also eat sand hoppers as well.