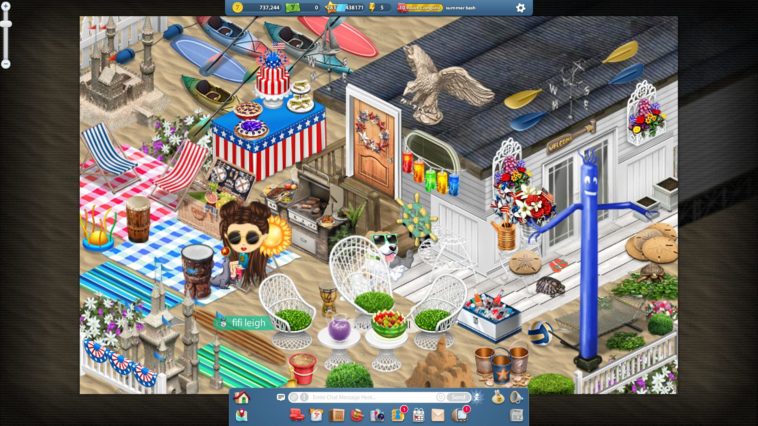 Since I joined Facebook 2008, mostly because I know other people there from other sites, such as the Old Myspace and other social network sites, I have accidentally created two Facebook pages. I decided to keep both pages, but place different profile picture for each. I also play Yoworld on both Facebook pages, during my spare time. My two avatars look different. This summer, I decorated two beach houses for each avatar, one has a beach cottage and one has a beach house. During the last days of August, I added other beach items to these beach homes, as part of the August Road Trip theme for the game.

The new gift for today is an animated and talking dog who wears sunglasses. In the above screenshot, he is on the rooftop, checking out the ocean view. Other new items include the tall blue balloon thing, a yellow toy on the left, cocktail drinks, flowers, drums, and a wooden surfboard. My avatar sits on one of the chairs, while her new doggie roams around playfully.

In this above screenshot, my avatar is sitting at one of the lawn chairs, eating a cool and juicy watermelon. Her doggie, Jackie Russell, is sitting on the sand, behind a lawn chair.

In this above scene, the doggy is standing up and dancing playfully, maybe begging for some summer snacks.

In this scene, my avatar moves to another lawn chair to enjoy a cold drink. Jackie Russell is talking to her.

My second avatar has a bigger beach house, she is married (her husband is in the front of the house), and she has many pets. She, too, has received the same doggy for today’s gift. But her doggy’s name is Jake Russ.  Can you find him in the above living room scene? This is starting to look like the Where’s Wally comic book game. He is seated on the floor, next to a white Irish Hound. There is also brown bunny and a black Labrador. There is also a gray cat upstairs as well as more bunnies. They are one big happy funny. They have roommates, a couple who are in the backyard by the ocean. This second avatar is more trendy, with long tiger-eye colored hair and a slouchy beanie.