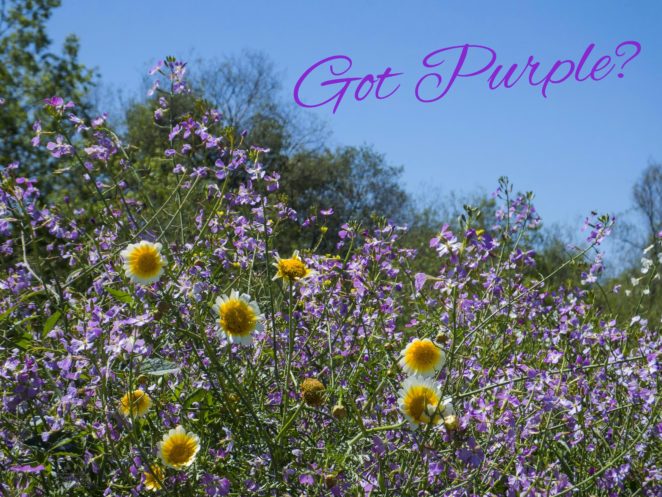 I remember one of Claude Monet’s famous quotes and while going through my flower folder this quote came to mind.  “I must have flowers, always, and always.”

“A weed is but an unloved flower.” By Ella Wheeler Wilcox

I have put together some of my favorite flowers images I have captured, near me. These are wildflowers in Oceanside, California.

The purple in the above image is Wild Radish.

The wild radish (Raphanus sativus) is not native. The neat, tidy little radish plant of farms and gardens  has given rise to a tall, gangly, wild radish.  It often forms large, colorful patches along the trails in areas formerly tilled by early farmers.

Below is an image of a bee in some Wild Mustard!

The Mustard plant is one that has been around since the Hellenistic and Roman time. However, it is not known when the mustard plant was domesticated. The domestication process is thought to have started in Western Asia and even in parts of Europe.

The next one is Camassia quamash.  It is part of the Lily Family.

The name comes from my ancestors, the Nez Perce Indian. We had a name for this plant, and means “sweet”. Qém’es…

It is a term that was used for the plant’s bulb, which was gathered and used as a food source by tribes in the Pacific Northwest, and were an important food source for the Lewis and Clark Expedition (1804–1806).

The bulbs were harvested and pit-roasted or boiled by women of the Nez Perce, Cree, and Blackfoot tribes.

Below is the Datura wrightii or sacred datura is the name of a poisonous perennial plant and ornamental flower of southwestern North America. It is sometimes used as a hallucinogen and  is classified as a deliriant and an anticholinergic. It sure is pretty. Ours have a lavender ring around the edge.

Then we have the Bougainvillea

Bougainvillea is a genus of thorny ornamental vines, bushes, and trees with flower-like spring leaves near its flowers. Different authors accept between four and 18 species in the genus. They are native plants of, South America from Brazil west to Ecuador and south to southern Argentina.

Next is the Lantana.

Lantana is a genus of about 150 species of perennial flowering plants in the verbena family, Verbenaceae. They are native to tropical regions of the Americas and Africa.

It comes in a variety of colors.

Hoya is an Asclepiad genus of 200–300 species of tropical plants in the family Apocynaceae (Dogbane). Most are native to Asia but there is also great diversity of species in the Philippines, and species in Polynesia, New Guinea, and Australia.

Common names for this genus are waxplant, waxvine, waxflower or simply hoya.

Then lastly the Rose… The one below is a mix between pink and red.

Then the White Wild Rose below.

It has blushes of pink in it. This one was back lit by the sun.

Hope you enjoyed my collection.