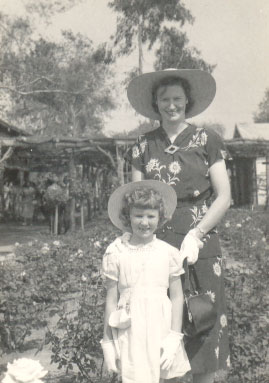 When I was a child, Knott’s Berry Farm in Buena Park, California, used to really be a berry farm. My extended family used to visit the Chicken House for dinner together about one Sunday a month and then walk around Ghost Town. Ghost Town was one of the attractions built to occupy those who waited in the long line for a chicken dinner.  That’s me with my mom sometime around 1948. We are standing in front of a rose garden. Behind us is what I think is the line of people waiting for their chicken dinner.

You can see how much fashions and customs have changed since then. Mom and I are both wearing gloves and hats. It may have been Easter Sunday, but I doubt it. We usually spent Easter at Cousin Edna’s house in Long Beach, with more extended family. There was always an Easter basket for me or Easter egg hunt in her backyard on that day. Many women and girls still wore gloves as part of dressing up to go to church back then.

Back in the day, there was no admission fee to get into Knott’s Berry Farm. The attractions like the gold mine, the volcano, and Ghost Town itself were intended to make money by keeping people occupied so they wouldn’t leave and find somewhere else to eat.

Probably the most popular attraction in Ghost Town was Sad Eye Joe, who never got out of the Ghost Town Jail during the years I was growing up. He was a real hit with adults, who would bring unsuspecting guests to visit Joe. They were amazed when the prisoner knew enough about them to make pretty personal comments and ask appropriate questions. But he didn’t do that unless a friend who knew a bit about you took you to visit the jail. My dad loved taking out-of-town visitors there. 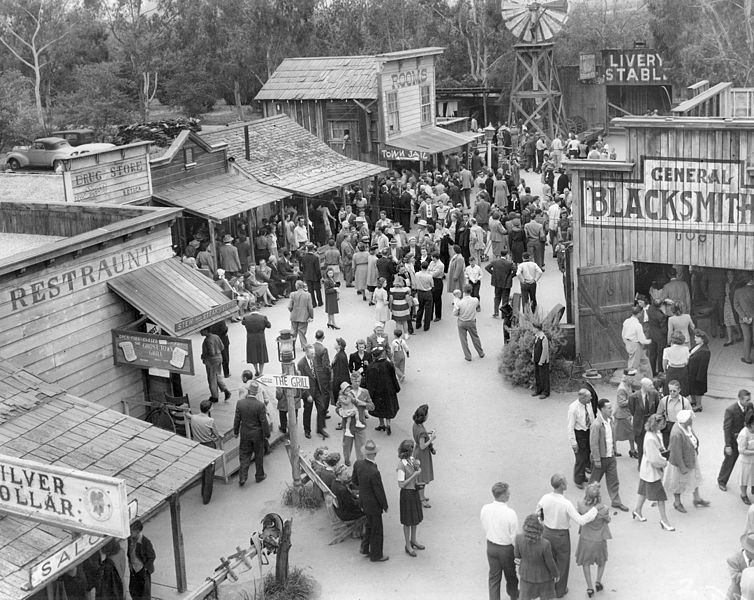 Later other attractions, for which there was a small charge, were added. One of the most popular, added in 1952, was the train ride around the grounds on the Calico Railroad. Robbers always boarded the train, shooting as they went, and that robbery– not the scenery — was the main reason people rode the train. The robbers always scared me a bit.

People also enjoyed panning for real gold in the mine. You paid for that, and it about covered the gold you could take home if you found any. I never did.

One of my most vivid memories is of the free three-minute show at the Wagon Train Panorama. It vividly showed the hardships of a family traveling west by covered wagon. It always drew me right in, and I watched it on many different visits. That’s what happens when there are two school teachers in your family.

Later, when I was older, more sophisticated attractions with fees were added. One was the Haunted Shack (1954), a place of optical illusions that made the old building seem haunted. I remember the lagoon, the California Mission Trail around it, and the Art Glow Studio at its edge. Those were there when I was in high school, and my boyfriend and I spent many a Friday or Saturday night just walking around there.

One of my favorite attractions added during my high school years was the seal pond across from Old MacDonald’s Farm. I loved watching seals, and I could have spent my entire visit just standing there feeding them. One old bull made a real nuisance of himself leaping in front of the other seals to seal the food that was being tossed in their direction before they could. Naturally, he was the fattest seal. And was he ever loud!

Have you ever been to Knott’s Berry Farm? What year did you go? What were your favorite attractions? Did Sad Eye Joe ever talk to you? Did you ever eat in the Chicken House?