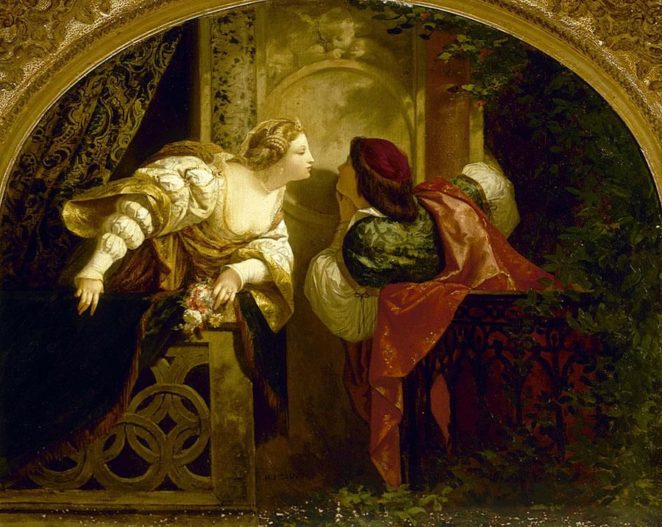 This week’s exercise at my writing group (the Hinckley Scribblers) was to write something based on the notices of births, marriages and deaths that appear in newspapers. I thought that I would take a celebrated character from Shakespeare and imagine how a local radio station might have announced these stages in their life. My choice was Juliet Capulet.

This is Radio Capulet, broadcasting to all parts of Verona with the sole aim of telling everyone that the Capulets are top dogs round here and a Capulet is worth a hundred Montagues.

The main purpose of today’s bulletin is to tell everyone the wonderful news that Lady Capulet was safely delivered last night of a daughter, whom we shall name Juliet. Mother and baby both look to be in excellent health.

God willing, Juliet will avoid all the perils of childhood and live a full active life. In the fullness of time she will make a good marriage and be the mother of sons who will defend the Capulets and oppose the dastardly Montagues.

Today is a great day for the Capulets and therefore for all Verona. As for what the Montagues might think, who cares?

This is Radio Capulet, with great news for Verona and a body blow for the Montagues. We are proud to announce that Juliet, the daughter of Lord and Lady Capulet, second only in greatness to Prince Escalus, has today been sought in marriage by Count Paris, who is not only a man of great wealth and high character but also a kinsman of the Prince.

This match will bring great credit on the Capulet family and show those Montagues just how inferior they are. Count Paris could have chosen any fair maiden of Verona for his bride, even a Montague if he had wished – if any Montague maiden could be described as “fair”, but no – only a Capulet was good enough him and we salute his excellent judgement.

Just a moment, listeners. I’m getting some other information in my headphones. What’s that? She’s done what? I don’t believe it – it’s not possible.

I’m sorry, listeners. I’ve just been told that Juliet has refused to marry Paris, and there’s a rumour that she’s been seen running off to Friar Lawrence’s cell, with the intention of marrying someone else. Who could that be?

What? No way! That can’t be true! She’s a Capulet – she just wouldn’t do such a terrible thing, would she?

This broadcast is suspended until the situation is sorted out and we have some better news to bring you. Thank you for listening.

This is Radio Capulet, with even worse news to bring you. Juliet is dead – killed by her own hand.

It’s a terrible story. It seems that she was deeply in love with Romeo Montague, and the feud between the families has led to the deaths of both Juliet and Romeo. Because we wouldn’t listen to her, and insisted that she marry Count Paris, she was forced to adopt a subterfuge in which she played dead, in the hope that Romeo would be able to find her and take her away before she woke up. However, the plan went wrong and Romeo believed that she really was dead, after which he took poison and died. When Juliet came round and found him dead she stabbed herself with his dagger.

So the lovers both died because their love was so great that they couldn’t live without each other.

Or, to look at it another way, their love was greater than the insane pride of our two families. We killed our beautiful Juliet because we saw her as an object for own advancement and not as a real person with her own feelings, wants and needs.

The Capulet family hereby announces that the feud with the Montagues is over, and that never again will we be so stupid as to allow our pride to kill our children.

Let this be a lesson to everyone listening to this broadcast. You’ll never do anything like this, will you? Let’s hope that never again will anyone ignore the power of love and let hatred rule their hearts. That doesn’t sound too much to ask, does it?