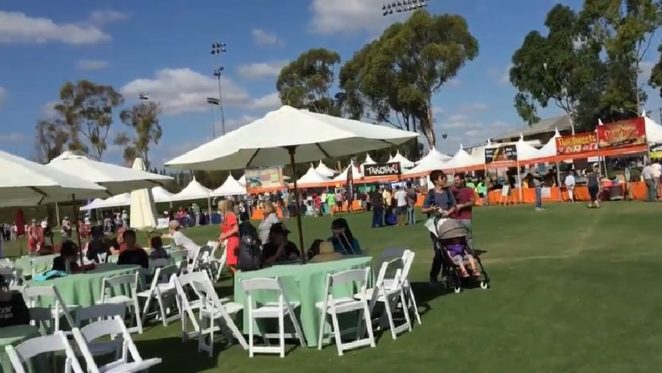 On Saturday, September 23, 2017, I went to the Global Village Festival at 10 am. Although it was located a park close to my townhouse area, there isn’t enough parking for everyone who wants to attend. So, most people parked at a parking structure, which is like two miles from my townhouse, even closer, and took a shuttle to the park, which isn’t farther than a mile from the parking structure. So, I parked at a certain parking structure and took a shuttle to the event. Upon arrival, I immediately started recording the cultural booths and event ambiance. After doing 11 videos, my iPhone battery died, even though it was fully charged when I started recording. At 1:30 pm, I just walked around, checking out dancing and musical performances as well as chatting with people. The weather was nice and breezy but sunny so I decided to stay at the event instead of going to the mall for the Macy’s event at 2 pm. I decided to buy some souvenirs as well as some watermelon juice. As I watch each video again, I notice that this event reminded me of the Disneyland ride, “It’s a small world after all.”

This 1st video displays the first booths that I checked out at 10 am. It was still early, and there were still people arriving at the event. Most of the booth vendors were still setting up their booths and organizing it, but I decided to start early with my Global Village Festival 2017 video tour. I walked by the first row of booths. UCI, Concordia, IVC, Cal State Fullerton, China, Peru, Hawaii, Buddhists, Hands for Africa, Thailand, Russia, India, Baskets, Egypt, Africa, Tibet, Palestine, Bali, and Gold Coast are just some of the booths visited on this video.

In the 2nd video, I walked by another row of booths, checking out their items as well as some entertainment. I browsed through Iran, American Indian and Palestine booths on my way.

I visited Iraq in the 3rd video. A woman was writing people’s names in Arabic. So, I got my name written in Arabic, which looks very long for a 4-letter name. I will display it on a separate video later.

In this 4th video, I visited Mexico and checked out Mexican trivia about the country. I signed a large board to give hope and peace for Mexico and the Mexicans because of everything they have been going through in their country.

I also visited the Philippines, where Filipino kids were dancing by the booth. Then, I checked out Japan by browsing inside the Japanese booth. I heard some Scottish men in kilts playing bagpipes nearby. As I checked out each booth and the entertainment, I noticed that all these countries and cultures here were starting to blend in into one world because I watch checking out Filipino dancing and Japanese items, while listening to bagpipes in the background.

I followed the bagpipes music and went to Scotland to check out tartan clans. I watched a young Scottish lad play bagpipes.

Next, I visited Sudan, Kurdistan, and Israel. The Ireland booth had two Irish Wolfhounds.

After visiting Ireland to play with two Irish dogs, I visited Armenia. Then, I watched a German band of three men play musical instruments and sing, nearby.

Next, I visited Tamil, which was crowded. I checked out some of their trivia and spices. I got my name written in the Tamil language. I will display it later, in another video.

Next, I visited Korea, Pakistan, China, Taiwan, and Turkey, checking out the interesting items in their booths about their culture. It was like street vendor shopping in different countries. I sampled some Turkish coffee with Turkish delight, although I have some at home. I asked for tips on improving my own Turkish coffee because sometimes I don’t make it very good. I want to learn how to do it like a professional. I asked a Turkish man to give me some tips on how to read a Turkish coffee cup. We had fun chatting about that for a while.

Unfortunately, this video is the last video for this year’s Global Village Festival tour. By 1:30 pm, my iPhone battery died. So, I just browsed and checked out the multicultural carnival. The last booths I recorded include Ghana and India.

This multicultural Global Village Festival video tour was a short and surreal 3-hour trip all over the world. Most of the boundaries or borders between these booths seemed to blur, as people, including little kids, interacted, participated, and socialized together, as they came together and blended together into a one world community in Irvine, California. The ambiance was filled with peace, love, harmony, and positivity, as many people connected and had fun at this multicultural carnival on a sunny but breezy Saturday in September 2017.