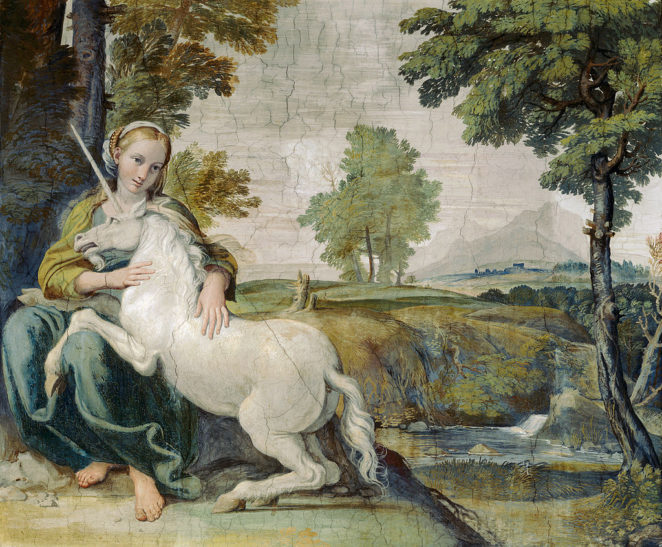 Is the Bible Wrong About Unicorns?

The King James Version of the Bible uses the word “unicorn” a total of nine times: Numbers 23:22 and 24:8; Deuteronomy 33:17; Job 39:9-10; Psalms 22:21, 29:6 and 92:10 and Isaiah 34:7. [Most modern translations use the word “bulls” in these passages which, as will be shown, is no more accurate than unicorn.] Of course we know that unicorns are a mythical creature so doesn’t this prove that the Bible cannot be taken as completely accurate? Actually, no.

First, it is possible that such a creature could have existed at some time and become extinct, but that would be a pretty lame argument and one that I would never use. After all, there are no known fossils of anything like the unicorn so I’m going to assume that unicorns never existed and move on to a more reasonable explanation.

Note that all of the occurrences are in the Old Testament. The Hebrew word which is translated as “unicorn” is re’em. The Septuagint version, a Greek translation of the Old Testament used by Jews living in what is known as the Diaspora (exile, that is, not in the Holy Land), the word monocerus, literally ‘one horn’ is used.

If you take a look at the various passages that speak of a unicorn, you begin to notice that the animal described is quite bulky. It looks nothing like a horse.

The Bible is not the only ancient written work in which the word monocerus appears. Pliny the Elder (23 – 79 AD), a Roman author, naturalist and commander in the Roman army and navy uses the Latin equivalent in his book Natural History (Book VIII, Chapter 29). The animal he describes, which English-speakers call the rhinoceros, is a one-horned animal that actually exists although its existence is imperiled due to over-hunting. When you examine the biblical texts, you will see that the rhinoceros fits much better than a horse-like creature.

So the Bible is not in error although the translators of the King James Version erred in their translation. That is not a problem since translations of the Bible are not considered to be infallible and this is not the only translation error in the KJV.

Artwork: “The gentle and pensive maiden has the power to tame the unicorn” by Domenico Zampieri (1581-1641).