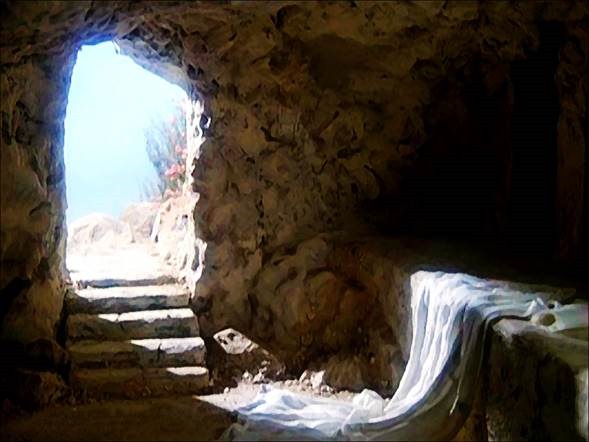 Christianity rests on the truth of a single event … the resurrection of Jesus Christ. Even St. Paul says this:And if Christ has not been raised, then our preaching is in vain and your faith is in vain. [1 Corinthians 15:14, ESV]

If Jesus did not rise from the dead, our sins are not forgiven and we’re all going to Hell. So, the $64,000 question is: Does it make sense to believe that Jesus rose from the dead?The short answer is yes. Here’s why.

Less than two weeks after Jesus was crucified His disciples were on the streets telling anyone who would listen that Jesus had risen from the dead. If Jesus’ body was still in the tomb, it would be a simple matter for the opponents of Christianity to open it up and say, “See. There he is. These guys are lying to you.” The fact that this did not happen shows that the tomb was empty as the disciples claimed.

So we know the tomb was empty but how did it get that way? Some people have postulated that Jesus didn’t really die. He just passed out and woke up in the tomb a few days later and walked out. This theory has actually been given a name … the Swoon Theory and it’s totally absurd. Here’s why:

So here’s the Swoon Theory scenario: Jesus, who had been tortured, beaten and crucified, was wrapped up and placed in a tomb. He woke up, made His way out of the hardened wrapping, pushed aside a two ton stone (the Greek word Luke uses in his gospel implies the rock was moved slightly uphill) and overcame the sixteen Roman soldiers. Silly, isn’t it?

Could the apostles have stolen Jesus’ body? Before the crucifixion all but one of them – John – panicked and ran. Peter denied knowing Jesus three times. Is it reasonable to believe that these terrified men got enough courage and strength to mount a successful attack on the Roman Guard? No way.

When you read the accounts of the resurrection in the gospels, you will notice that it is women who make the discovery. Why is this important? In the Jewish culture of the time the testimony of a woman was considered worthless. They were not allowed to speak in the courts. Anything they said was ignored. If you were going to invent a story, you would not have it depend on the testimony of a woman.

All of the apostles except John died a martyr’s death. John would have as well had not God divinely protected him when the Romans tried to boil him in oil. He later died of old age in exile. Not one of them recanted. While it is certainly conceivable that a group of men could invent a hoax, how many would be willing to die excruciatingly painful deaths to protect that hoax? Very few, if any, I would think.

Sir Arthur Conan Doyle’s legendary character Sherlock Holmes was famous for saying that, once you have eliminated everything that is impossible, whatever is left, regardless of how extraordinary, was the truth. (I paraphrased a bit.) The facts, extraordinary as they are, leave us with no other conclusion than that Jesus rose from the dead on Easter morning just as He said He would.