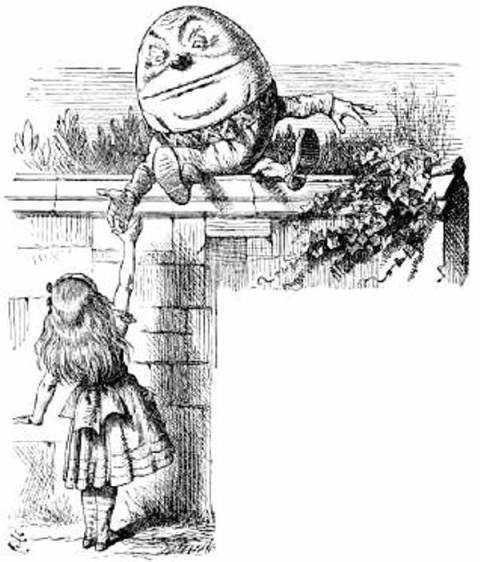 Everybody knows the “Humpty Dumpty” nursery rhyme, and some people will tell you that they know its origin, but are they right?

Most people, on hearing this nursery rhyme, immediately think of Humpty Dumpty as being an egg that fell and broke and was therefore unable to be repaired. This image is largely due to the work of John Tenniel in illustrating Lewis Carroll’s “Through the Looking Glass”, in which he pictured Humpty Dumpty as an egg, as indeed the text implies.

One theory is that the original Humpty Dumpty was not an egg, or even a person, but a large cannon that was used during the siege of Colchester in 1648, during the English Civil War. The royalists were besieged by the parliamentarians, commanded by Thomas Fairfax, and were able to keep them at bay largely due to expert use of the cannon by a gunner named “One-Eyed Thompson”, who defended the town in this way for about ten weeks.

Humpty Dumpty, it is said, was positioned on top of the tower of St Mary’s Church, which was hard by the town walls. When the tower was eventually hit by enough cannonballs from the besiegers, the cannon fell over the wall into a boggy area from where it was found to be too heavy to raise.

However, many objections have been raised to this explanation of Humpty Dumpty, and it is not now generally accepted. Other originals have been proposed, including King Richard III with his hunched back (according to Shakespeare), but there is no reason to accept these explanations either.

It looks as though one has to take this nursery rhyme more or less at face value, namely as a riddle for children to guess at what Humpty Dumpty could be – and an egg would be an excellent answer! It might also be a “cautionary verse” – a warning to children not to sit on high walls for fear of the consequences should they fall off.