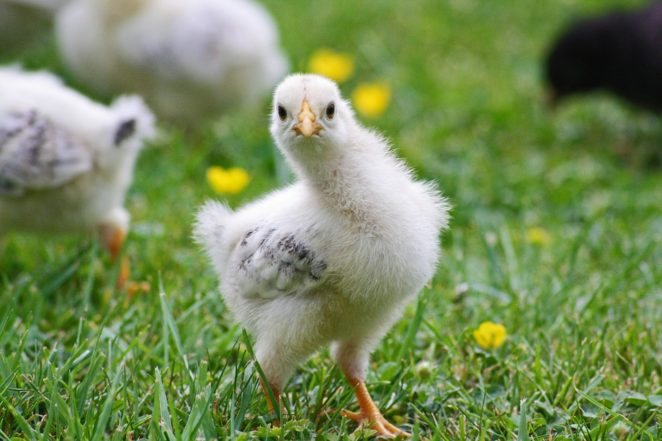 The telling of stories round the camp fire or by the hearth has been going on for thousands of years, and some stories have spread far and wide, changing as they go. Here is a charming example that may be new to you.

One traditional folk story that is known across Europe, and has spread to the Americas, is that of “Half Chick”, which is known as Mediopollo in Spain, Demi Coq in France and Half Rooster in New Mexico. The basic theme is: “Don’t underestimate the little guy who can use cunning to win his way through”.

As might be expected, a story that has spread so widely is bound to have thousands of variations, so here is just one of them.

The story of Half Chick

Half Chick was the runt of the clutch, who only grew to be half the size of his brothers and sisters. He found some money and went off to buy some grain from the king. On the way to the royal palace he walked beside the river, who asked him where he was going. River was bored, just running along all day, so he asked if he could come to the palace too. Half Chick agreed, so River squeezed up very small and hid in Half Chick’s bottom.

At the palace the king listened to Half Chick and said he would fetch the grain for him, but he wanted the money first. However, he had no intention of giving Half Chick anything, so, having taken the money, he sent Half Chick round to where the king’s chickens were, to stay the night. He was quite sure that his full-sized chickens would make short work of Half Chick.

The king hadn’t reckoned with Half Chick, though. On the way to the chicken shed Half Chick spotted Fox coming along. Fox saw Half Chick and rushed up, thinking that there was a tasty morsel to be had. But Half Chick said to Fox, “Why eat me when there are lots of fat chickens in this shed?  If I hold this loose plank out of the way you can get in and have a real feast”. And that is what happened.

The next night the king sent Half Chick to stay in his stable with his prize horses, being quite sure that they would trample Half Chick to death. But Half Chick saw Wolf and said to him, “Why don’t you help yourself to some lovely horsemeat? My friend Fox will open the door for you, because it’s too heavy for me. So Wolf rushed in and killed all the king’s horses.

The king was infuriated and had Half Chick thrown into the oven in the palace kitchen. Neither Fox nor Wolf could help him out of this predicament, but he had one powerful friend left. This was River, who was still hiding in Half Chick’s bottom. Half Chick let River out, who not only extinguished the fire in the oven but also flooded half the palace.

The king then gave in and sent Half Chick away with all the grain he wanted as well as refunding all his money. Fox and Wolf helped him carry the grain to where River had a boat waiting to take him home.

The story therefore has two morals – not only the one mentioned above but also: “Make powerful friends who can help you when you most need them”!