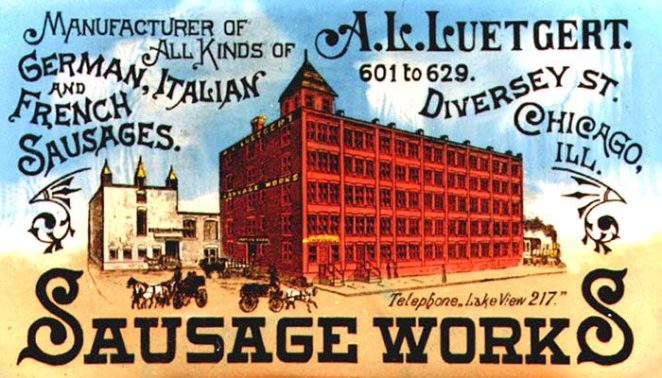 In 1879 Adolph Luetgert, a German immigrant, opened his sausage factory on the south side of the 1700 block of West Diversey Parkway in Chicago (the southwest corner of Diversey and Hermitage). Luetgert had arrived in the USA in 1865 or 1866 and had tried his hand at a variety of jobs before  moving to Chicago in the 1870s and finding success as “The Sausage King” of Chicago.

Luetgert’s first wife, Caroline, had died on 17 Nov 1877 and he had remarried, to Louise, on 18 Jan 1878, two months later. The marriage was tumultuous and there was a history of domestic abuse. He fathered six children by both women but only three survived past the age of two.

On 01 May 1897 Louise disappeared. Several days later her brother reported her disappearance to the police. Captain Herman Schuettler was able to confirm from two sources that she had entered the sausage factory around 10:30pm and had not been seen since. Rumors spread that she had been ground up into sausage which had been sold to Luetgert’s unsuspecting customers. Luetgert claimed that Louise had run off with another man. Further investigation uncovered financial difficulties and that Luetgert had begun courting a rich widow.

As it turns out, on 30 Apr Luetgert had ordered 378 pounds of crude potash and 50 pounds of arsenic leading Schuettler to speculate that Luetgert murdered his wife, boiled her body in acid, and put it in the furnace. A large chemical vat was drained and a small fragment of a skull fragment along with two gold rings, one of which was engraved “L.L.”. Luetgert, although he claimed to be innocent, was arrested for the murder on 07 May.

The sausage factory was not torn down as is commonly reported. There was a fire there on 26 Jun 1904 but only the interior was destroyed. The exterior still stands and is now condominiums. Stories of Louise’s ghost haunting the area and the couple’s home. There were accounts that Luetgert went insane in prison after seeing his wife’s ghost but he actually remained sane until his death.