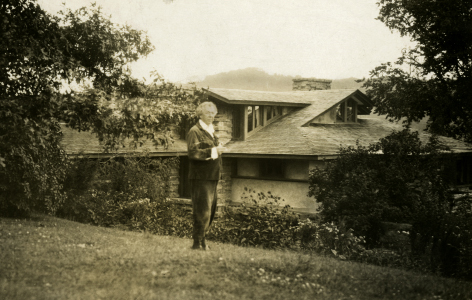 This is a rather gruesome story, even for a story about a mass murder. If you want to sit this one out, I won’t mind.

Frank Lloyd Wright is probably the most famous American architect. He worked mainly in Chicago where he developed what is known as the Prairie School of architecture. However, in 1909 Wright became involved in a scandal. He had an affair with Mamah Borthwick Cheney, the wife of a client for whom he had built a home in the Chicago suburb of Oak Park. Wright abandoned his wife (nee Catherine Lee Tobin) of twenty years along with their six children and the two fled to Europe. (Wright did eventually get a formal divorce from his wife but it took eleven years because his wife delayed the process.)

Eventually Wright wanted to return to America but did not want to deal with the scandal which meant avoiding Chicago. To this end he had a home built on land in Spring Green, Wisconsin. The land belonged to his mother’s family and was named Taliesin, a word meaning “shining brow.” In 1911 Wright, his mistress, who had divorced her husband by then, and her two children moved into the house. The secrecy was short-lived as the press found out about their love-nest.

Among the workers in their household staff were Julian and Gertrude Carlton, a married couple from Barbados. They came to Taliesin in June of 1914. Gertude cooked and Julian, well-educated and well-liked, functioned as a handyman and butler.

Things went bad on 15 Aug 1914. Wright had gone to Chicago on business. Work was being done so not only was there the usual household staff but also additional workers including William Weston, a carpenter, and his 13-year-old son. The workers were eating lunch in a dining room set aside for them while Mamah and her two children ate on the veranda.

Julian Carlton entered the dining room to ask Weston’s permission to use some gasoline to clean a rug. Weston gave his permission and Carlton left. The details about what happened next are uncertain.

Carlton went onto the veranda holding a hatchet with which he killed Mamah with one blow to the face. He then killed her son, John, aged 11. Her daughter, Martha, who was 9, ran but Carlton caught her and killed her. He poured gasoline over the bodies and set them on fire.

Carlton went back to where the workers were eating and poured the rest of the gasoline under the door and then lit it. Herbert Fritz, one of the workers, was near a window which he broke and jumped through. He broke his arm and his clothes were on fire but he was able to extinguish the flames by rolling down a hill.

David Lindblom, another worker, was able to get past Carlton with only a blow to the head with the blunt end of the hatchet. He suffered some burns but, with William Weston, was able to run to a neighbor’s house about half a mile away. By the time the firemen arrived, the house had been destroyed. Lindblom later died from the burns.

Carlton was found hiding in a fireproof furnace. He had drunk hydrochloric acid to commit suicide but he did not die until seven weeks later. Gertrude Carlton, who knew nothing of her husband’s plan, was found in a nearby field. She was questioned but released with $7.00 and a train ticket to Chicago.

Carlton testified that the family had picked on him. In particular, Emil Brodelle, one of the workers, had called him a nasty name.

There was some question regarding whether Julian Carlton had told his employers that he and his wife were leaving or whether he had been given two weeks notice by Mamah, but it has been reported that he acted strangely in the days leading up to the murders.

At first Wright was only notified that Taliesin had been destroyed in a fire. Naturally, we was deeply saddened when he learned of the deaths of his mistress and her children. He paid for the funerals of all seven of the workers who had been murdered. Depressed, he suffered insomnia, weight loss and temporary blindness. His sister, Jane Porter, cared for him.

Wright rebuilt Taliesin in Mamah’s memory but, in 1925, it was struck by lightning and burned to the ground again. This did not stop Wright from building Taliesin III on the same spot. It still stands today.