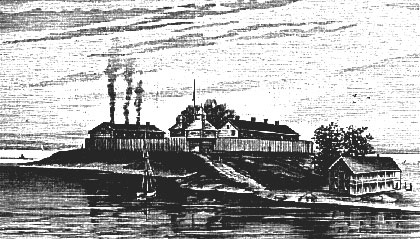 Before there was a Chicago, there was a Fort Dearborn. The fort was built in 1803 by Captain John Whistler and named after then-US Secretary of War Henry Dearborn. The Indians had ceded the land to the USA after their defeat in the Northwest Indian War (1785-1795).

The Indians followed a Shawnee mystic by the name of Tenskwatawa. His brother was a leader named Tecumseh. Tenskwatawa told the Indians that they could only purify their society by expelling the “children of the Evil Spirit,” the white settlers.

Due to a long-running feud, Whistler and other senior officers were removed and replaced by Captain Nathan Heald.

On 06 Apr 1812 a group of Winnebago Indians attacked a farm on the south branch of the Chicago River (now know as the Bridgeport neighborhood). An American and a French Canadian were murdered. A soldier and a small boy were able to escape and inform Heald. The nearby settlers moved into the fort.

In the meantime, the USA had declared war on the British (the War of 1812). On 17 Jul the British captured Fort Mackinac. Heald was ordered to destroy all arms and ammunition and give any useful supplies to Indians with which they had good relations in the hope of getting an escort to nearby Fort Wayne.

The day before the attack Heald informed the Potawatomi of their intention to abandon the fort. They believed that they would be given the weapons but, following orders, Heald had them, and any remaining liquor, destroyed.

At 9:00 am on the 15th of August a group of 54 US regulars, 12 militia, 9 women and 18 children left Fort Dearborn for Fort Wayne. They were being escorted by some Miami Indians.

The Potawatomi Indians ambuushed them about 1½ miles from the fort. (This would put it near today’s Roosevelt Road and Michigan Avenue.) The battle lasted fifteen minutes. Many of the soldiers, two of the women and most of the children were killed. Some were captured alive and later ransomed. Accounts differ regarding whether or not the Miami escorts were involved or not. The fort was burned to the ground.

Fort Dearborn was rebuilt in 1816 and the US government decided that Indian tribes would no longer be allowed to live in proximity to forts.