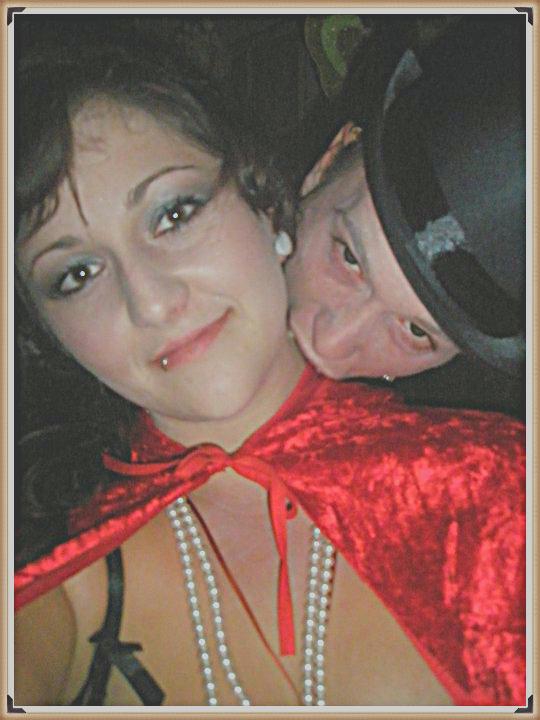 When the ghosts come out to play… I am talking about Halloween! The second biggest holiday in the United States, with Christmas being the first.

I came across some cool facts about Halloween that I had not known. I thought that there must be more out there that don’t know a few of these facts I have listed below.

So, that being said, I loved Halloween when my kids were young. I made all the costumes by hand, and painted faces. We always won Halloween costume contests, and was so much fun.

Today, my son and daughter in law’s anniversary is on Halloween, it’s the night they met. They met at a Halloween party 10 years ago. They always dress up for Halloween in costumes and go out, or have a party.

Below are photos of these times. Oh yeah, we also torture the dogs by putting them in costumes for photo sessions. We do not leave these on long, just long enough to take photos. NO dogs were really tormented, for long anyway.. giggles.

Dracula and his meal.

Halloween is more of an Irish holiday than Saint Patrick’s Day.  Celts believed Samhain was a time when the wall of our world and the paranormal world was lowered. They dressed up in costumes and masks during the festival to ward off evil spirits.

My sons house decorated for a party.

Hallowmas is a three day Catholic holiday where saints are honered and people pray for the deceased. At the start of the 11th century, the pope decreed that All Hallow’s Eve would last from October 31, to November 2. Most likely because that was when Samhain was and the church was trying to convert pagans. By the 18th century All Hallow’s Eve was referred to as Hallowe’en.

I thought this was a good idea, they let the grass grow out for a few weeks before the party then put sticks in the ground and solar lights.

Webs around the windows and plants, jack o lantern and skeleton at the front entry way.

The origins of Jack-O-Lanterns comes from a Celtic folk tale of a stingy farmer named Jack who would play tricks on the devil. The devil responded by forcing him to wander purgatory with only a burning lump of coal from hell. Jack took the coal and made a lantern from a turnip, using it to guide his lost soul.

Meanwhile getting ready for the party which was called the their Happy Halloversary party. lol  A little three man band will play in this open space.

Another skeleton poster in a window..

Lily as a spooky witch..

This one was funny..

A fairy and the guy from the video game, Hitman.

The band. They were really good and the band was a “SKA” band. A mixture of punk and reggae. And they play really fast and tight.

People dancing… everyone had a great time.

This costume was so cute.

And I leave you with a joke..