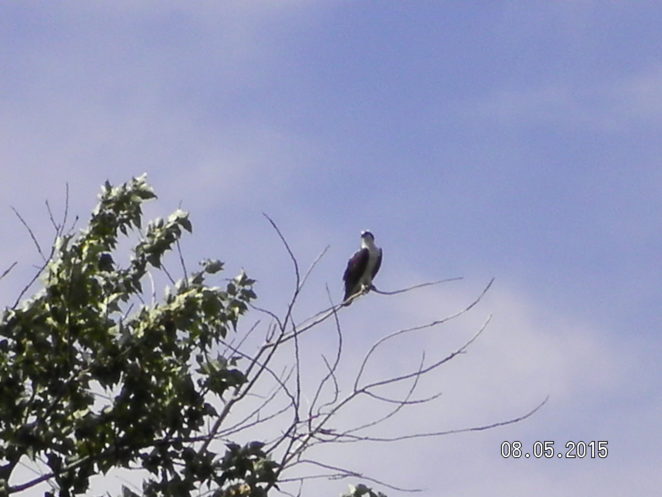 Immediately before we moved into the house where we now live, we lived in a place about 12 miles south of here. It was literally a large log cabin with no power or running water, overlooking the river. Immediately across the river from that place was a raised platform on a telephone pole, erected for ospreys to build a nest on. The whole time we lived there, there was indeed an osprey nest on the platform and the ospreys were almost always in the nest or nearby.

This led to one of the most unique morning rituals I’ve ever been associated with. You see, it was my habit to get up before dawn and when the sun would just start cresting the surrounding mountaintops, I’d go outside and walk around, taking in the tremendous beauty that was all around. Each morning, I’d go out and sit on a big rock and I’d look out over the river, marveling at the ospreys and the young they subsequently raised.

For those who’ve never been around ospreys, they are beautiful birds of prey, roughly the size of a hawk. They eat very little but fish and are experts when it comes to fishing. Whether from a perch or when flying in a circular pattern, if the osprey sees a fish in the water, they tuck their wings and dive, head first. Just as they get to the water, they raise their heads and lower their talons, hitting the water with a splash. At full speed, the osprey momentarily disappears under the surface of the water and almost immediately erupts from the water, usually with a fish in their grasp.

That part has nothing to do with the ritual that was established, but it was part of the fascination I had.

I’d been watching the ospreys every morning for a few weeks when one day, something astounding happened. The female osprey saw me sitting there and flew across the river toward me. She perched in a dead cottonwood snag on our side of the river. Then for the next five minutes or so, she “spoke” to me, making her high-pitched shrieking call. It was as if she was telling me, “Good morning! It is a beautiful day!” Of course, I spoke back to her.

From that day on, every morning when I would go out to watch the ospreys, she would fly over, perch, and tell me good morning. On some mornings, the “conversation” would be longer than on other mornings, but she kept it up morning after morning for several months, until we moved into town.

That was six years ago and the last time we went by that spot, the nest and the ospreys were still there, though I don’t know if it is the same pair, their offspring, or a different pair of birds. It brought back memories of those many mornings when the female osprey would fly over, perch in the cottonwood snag, and say, “Good morning!”

This picture is of the female osprey, perched in the cottonwood snag. The date shown in the lower right is incorrect, though. The picture was indeed taken on the fifth of August, but the year was 2012, not 2015. For whatever reason, the camera kept resetting the date to 2015, no matter how many times I changed it.