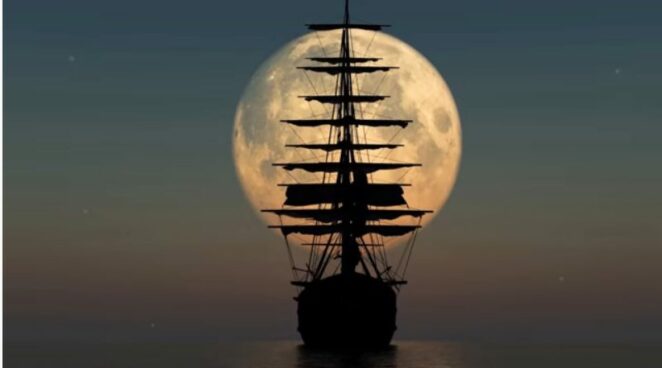 I have always had an affinity for the old Tri-masters of bygone days. And while the caravel depicted in the top image may not have been silhouetted against a backdrop of a super-moon, it was a delight to see. On August 3, 1492, Christopher Columbus and his crew set sail from the port of Palos in southern Spain on three vessels: la Santa Clara (Niña), La Pinta, and la Santa Gallega (Santa Maria). Two of the ships, the Niña and Pinta, were tiny by today’s standards—only 50 to 70 feet from bow to stern—but prized for their speed and maneuverability, they called them caravels.

The Santa Maria, Columbus’s flagship, was a larger, heavier cargo ship. For 35 days, Columbus and his crew of 86 Spanish sailors sailed westward searching for a passage to China and India. With the men close to mutiny against their “foreign” captain, Columbus was about to turn back when the cry went out at 2 a.m. on October 12, most likely because of the bright supermoon, that land had been sighted. Columbus hadn’t found a western route to India but his success in crossing the Atlantic was because of the ships he chose for the perilous voyage, particularly the diminutive Niña and Pinta.

Though finally, only two of Columbus’s ships ended up being caravels, Isabella’s decree speaks to the popularity of the vessel during the 15th-century “Age of Discovery.” Starting with Portuguese explorations of the African coast in the mid-1400s, caravels were prized for their sleek, lightweight hull and their uncanny ability to sail directly into the wind. When the royal decree went out in 1492 from Queen Isabella of Spain to fund Columbus’s first voyage, it read, “By these presents, we dispatch the nobleman Christoforos Colón with three equipped caravels over the Ocean Seas toward the regions of India for certain reasons and purposes.”