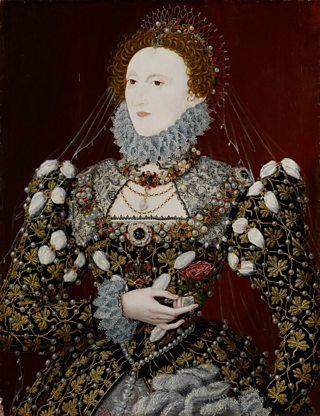 She was the only British queen never to marry. Privy Councillors and MP’s expected her to marry in order to secure the succession, and dozens of foreign princes and English noblemen wanted to marry her. She, however, kept her thoughts on the subject private, which led to much speculation as to why she never did marry. One particular suitor, Robert Dudley, the Earl of Leicester, was a particularly amorous, and good-looking courtier and while she spent copious amounts of time with him, leading to people thinking they were in love, there was a big problem in boughs, since he was already married. When his wife was suddenly and mysteriously found dead one morning, there were rumors and a hot scandal soon erupted.

This led to her withdrawal from Dudley’s ambitious advances as her reputation and position as queen were under serious threat. Another prominent courtier in 1560 was King Philip of Spain, who proposed to her. He was a Catholic who had been married to her sister Mary, after her passing. MPs were dead against this alliance for fear of causing religious upheavals and allowing foreign influence in England’s government. She cautiously rejected his offer.

In 1567 she seriously considered marrying Archduke Charles of Austria but his Catholic faith meant there were the same religious differences as with King Philip of Spain, alas in the end there was no match. Marriage negotiations went on for nearly a decade with Francis, Duke of Alencon who was heir to the French throne. An alliance of this nature held many political advantages to be gained, for example, influence over French policy in the Netherlands, unfortunately, Francis died in 1584 after which she was destined to remain alone, earning her the title of “Virgin Queen”, an image she emphasized portraying herself as a monarch who put the stability and security of England before her personal joy, as she would never marry anyone who might jeopardize England’s position. So, what was her name? get it here