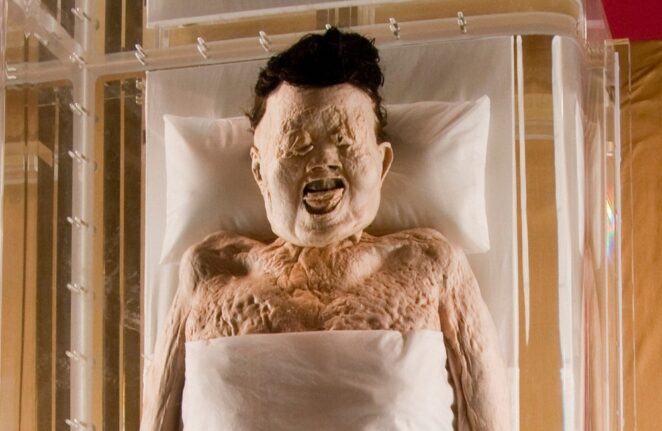 China’s eternal Mummy. Found over 2,000 yrs after her death, her skin was still soft, her arms & legs could flex at the joints. She was buried in a mystery liquid scientists can’t replicate & remains the most well preserved ancient human ever discovered, Lady Dai, or Xin Zhui, was the aristocratic wife of a Han Dynasty nobleman Li Cang.

There was no doubt she lived an extravagant life—her tomb was filled with luxuries that only the wealthiest of her era could afford. These include hundreds of richly embroidered silk garments, skirts, dainty mittens, a silk sachet filled with various spices, flowers, and fragrant reeds, boxes of cosmetics, more than a hundred lacquerware, musical instruments and statuettes of musicians, even prepared meals and more than a thousand other items.

“These objects show that Lady Dai lived a luxurious life, which she enjoyed very much,” says Willow Weilan Hai Chang, director of the China Institute Gallery in New York City, where some of the objects recovered from her tomb were displayed at an exhibition in 2009. “She wanted to maintain the same lifestyle in the afterlife.” It was this good life she craved for that eventually robbed her of it. Reputedly a beauty in her younger days, Lady Dai indulged herself in every culinary delight (such as scorpion soup) until her diminutive frame buckled under obesity.

Art on her funerary banner depicted her leaning on a cane. She might have been unable to walk without it because of her coronary thrombosis and arteriosclerosis that she acquired due to her sedentary lifestyle. She was also found to have—as her autopsy revealed—a fused disc in her spine that would have caused severe back pain and difficulty walking.