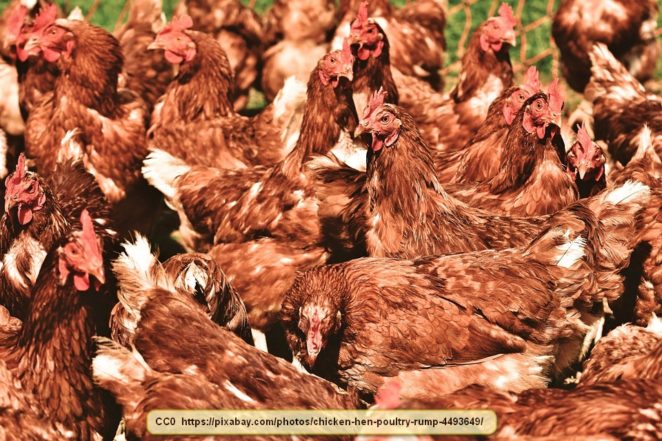 We’ve raised chickens a number of times over the past 20 years or so, primarily for egg production, and I have to say that sometimes I’m amused at some of the things people believe about chickens, which aren’t correct.

For example, people sometimes have the idea that chickens can’t deal with cold weather. The truth is that chickens are extremely hardy. Since we have only 4 laying hens at the moment, their hutch and nesting box isn’t very large; about 4 feet by 3 feet by 3 feet tall. This is half-filled with straw and this is where the hens sleep at night and lay their eggs. The hutch isn’t heated.

We’ve occasionally had temperatures that have dropped to about -30° F and it doesn’t seem to bother the chickens at all. When they are all in the hutch, their body heat warms it up considerably. I just need to make sure I take warm water out several times a day during the coldest weather so they have water to drink. Water freezes rapidly at those temperatures.

Another notion that isn’t correct is that chickens should never be fed meat or that they will turn into cannibals. The truth is that there is very little that a chicken won’t eat. In fact. one of the ‘trick’s’ used to fatten up chickens prior to the wintertime is to feed them meat. Commercial chicken food is primarily grain and cracked corn. This isn’t very high in protein, which the chickens use to get healthy before the onset of winter. Feeding them meat gives them the additional needed protein.

They also don’t turn into cannibals. The natural food for chickens includes insects and other invertebrates. That is meat. If we have any food at home that isn’t eaten fast enough and is beginning to get old, it goes to the chickens, even if it contains meat. None of our chickens have ever become cannibalistic. I suppose they might if they had nothing else at all to eat, but that is true of many other creatures, too. Mind you, I won’t feed the chickens raw eggs because they can develop a taste for eggs and might start eating their own, but this is a lot different than feeding them meat.

Still another idea is that chickens are only capable of laying one egg per day, per hen. While I don’t know what the maximum is, during peak egg production, it isn’t uncommon for us to get 8-10 eggs per day from our 4 hens. No matter how you figure it, that is more than one egg per day per hen.

What makes it even stranger is that some of the people who have these silly notions actually have chickens. They should really know better.