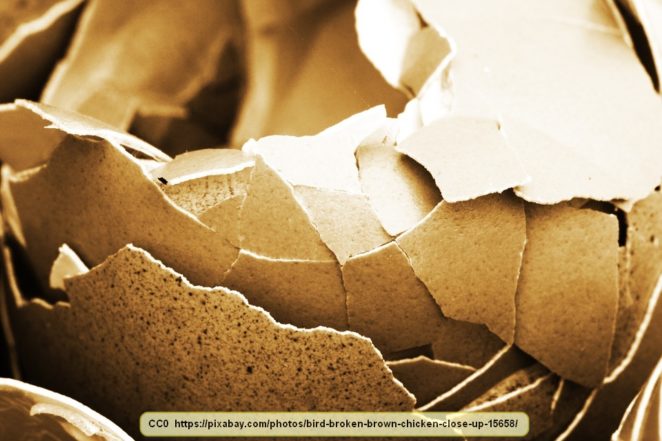 Recently, I had a question regarding why it took eggshells so long to decompose in a garden. This got me to thinking about a minor controversy over adding eggshells to a garden, in the first place.

First, the answer for what it takes so long for the shells to decompose in the garden.

Eggshells are made of 95-97% calcium carbonate. This is the same substance in bones, teeth, and chalk, such as in the cliffs of Dover in England. Calcium carbonate is a relatively stable substance that doesn’t break down very rapidly unless it is subjected to an acid.

It breaks down when it is contacted by an acid only because calcium carbonate is a base. As it happens, most rainwater is slightly acidic, so rainwater would slowly cause the shells to decompose, releasing the calcium. Most domestic water supplies are closer to being neutral, though, so watering the garden (and subsequently the eggshells) wouldn’t cause much decomposition of the shells unless the soil was slightly acidic or a very weak acid was added to the water.

As importantly, the larger the fragments of eggshell, the longer they would take to decompose because they have less surface area for acid to work on. If you bury a whole beef bone out in the yard, it will probably be pretty much whole, years after it was buried, for exactly this reason. Bone meal is commonly used as a garden additive, but it is useful because the bones that are used have been finely ground, sometimes into a powder. That greatly increases the surface area, so the bones break down much more rapidly.

Now, for the controversy. Some people maintain that adding eggshells to garden soil makes no difference at all, mostly because calcium carbonate breaks down so slowly. To be fair, they at least attempt to use science to back up this supposition, though the science is a bit faulty.

Calcium is nearly insoluble in pure water. It doesn’t dissolve. This is one of the issues some plants can have. For example, tomatoes and peppers require a lot of calcium, but since calcium doesn’t dissolve easily in water, it isn’t a mobile soil nutrient. That is, calcium doesn’t move from one area to another. It is quite possible to have garden soil that is extremely deficient in calcium while soil just 10 feet away can be high in calcium.

Tomato gardeners might experience this by noting that one tomato plant produces heavily while another that is only a few feet away produces very few tomatoes and those fruits are subject to rotting.

However, while calcium doesn’t dissolve in pure water, calcium carbonate does break down in acidic water and some calcium does subsequently become dissolved (actually, it is a suspension rather than a solution).

So adding powdered eggshells can indeed help the garden, in the presence of rainwater, which is slightly acidic. I’ve personally used eggshells to successfully combat a calcium deficiency in the soil. I grow a lot of tomatoes, and that is one of my “secrets”, which isn’t a secret at all. I could as easily use bonemeal, but the eggshells cost me nothing.