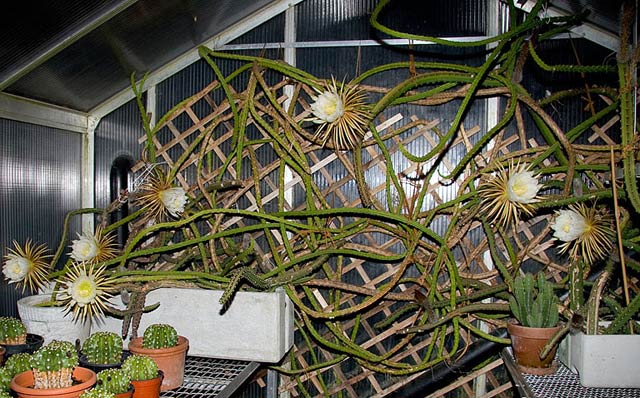 Nobody sells this beautiful flower, nobody buys it, no one has managed to make an arrangement from him, only rarely had the opportunity to see him!His name is Kadopul, better known as Queen of the Night, is extremely rare and short-lived. It blooms around midnight and already dies before dawn … 🙁 It is growing up in Sri Lanka and a small number of people have the privilege to see it! As usual, what is rarely and unachievable is classified as the most desirable things on the planet!It’s a cactus that flashes at night and has a big white flower that smells like vanilla!NATURAL NIGHT or Cereus grandiflorus or Selenicereus grandiflorusa fleshy climber with a rooted root, blooms at night and smells of vanilla and the flower lasts some 6 hoursminimum temp. about 15 * Cwatered regularly in the summer, winter less (of course, especially if it is colder), the bowl must be well drainedoriginated from the eastern Mexican and from the caribbeanonce used by Indians for medical purposes, and is still used in pharmacy for the treatment of heart disease, headaches and nervous diseases …they say it’s the nicest cactus