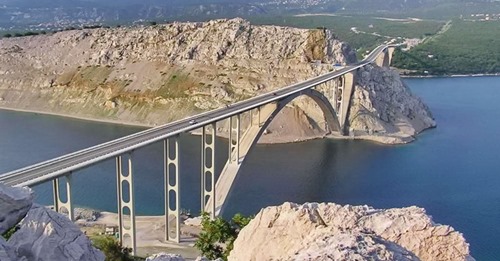 The Krk Bridge (Croatian: Krčki most, formerly Tito’s Bridge) is a two-lane road bridge that connects the island of Krk with the coast near Kraljevica. The length of the bridge with all accesses is 1430 m. Work on the bridge began in July 1976 under the auspices of the President of the Socialist Federal Republic of Yugoslavia, Josip Broz-Tito. The grand opening was on July 19, 1980. The bridge became famous for its concrete arch to the island of Sveti Marko, which was 390 m long (the actual span of the arch is even 416 m, as part of it is below sea level) during construction the longest concrete arch in the world and was 85 m longer than the then longest bridge in Sydney. Before the construction of the bridge, the island was connected to the mainland by ferries on the line Črišnjeva – Voz. Driving across the bridge is charged.