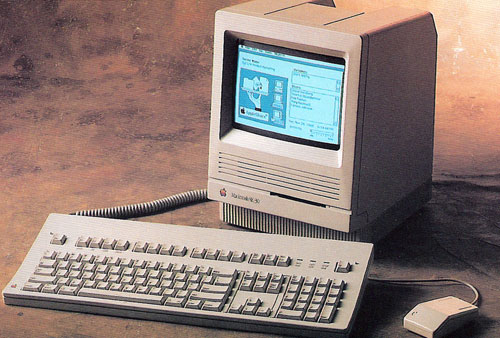 Ah, the sad mac! The chimes of death.

what comes next is iconic. It is considered one of the most monumental commercials ever aired on American Television.

Apple IIc, and I outgrew that. Apple IIgs and honestly I outgrew it as well. So, my good friend, who was finishing up his degree and selling computers, convinced me it was time.

The new Motorola 68030 chip was out and Apple built a computer around it. The Machtinsoh SE had been on the market for about 18 months. Now the new Macintosh SE/30 appeared.

It was my primary computer for more than two years. I loved my SE/30. I had the always magical imagewriter printer (a line printer) with a scanner you could use attached.

My class built a Hypercard stack (Hypercard was an application that predates hypertext or Http) about dinosaurs using the Mac SE/30.

it was on 12 floppy disks for those of you that remember swapping floppies!