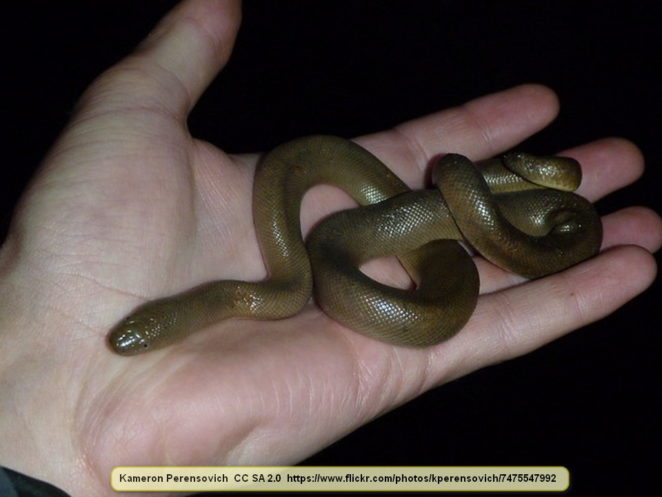 People might be quite surprised to find out that there is a native species of boa constrictor that lives in Montana. However, it doesn’t look much like other boas and certainly not what people normally visualize when they think of boas. It is called a rubber boa (Charina bottae).

For one thing, it isn’t especially colorful. It is brown to olive on the back and the belly is beige to yellow. Sometimes they have tiny flecks of color on them, but they are still drab snakes.

The common idea of a boa is also a large snake. Rubber boas reach a maximum length of a little over two feet and are more commonly around one foot in length.

Rubber boas get their common name from the fact that they rather look and feel as if they are made out of rubber.

These snakes don’t move very fast and are very docile. They aren’t often seen, either, even when the population is relatively large, partly because they are nocturnal and spend a lot of their daytime under rocks and logs, especially in shaded areas.

The majority of the diet of rubber boas consists of mice, though they will also eat lizards, salamanders, frogs, and even an occasional snake.

Rubber boas normally have 2 to 8 young in September. This is a peace-loving snake that is tremendously slow to anger and it is totally harmless. It is also found throughout the Pacific Northwest and in small, sporadic areas of California. It is extremely helpful in keeping mouse populations in check.