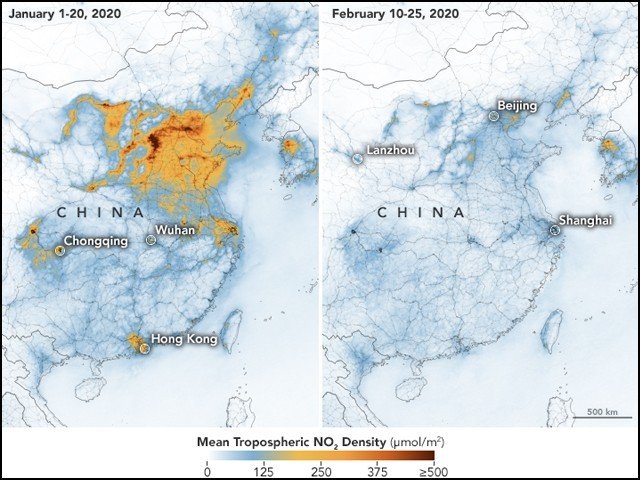 Environmentalists say that although the global outbreak of the novel corona virus is affecting the world economy and millions of small factories are closed, global air pollution is also seeing a dramatic decline.

Mr Burke added, If this reduction is seen from the point of view of health benefits, it means that in the last two months 4000 children under the age of five and people more than 70 years, due to air pollution reduction in China. The lives of 73,000 elderly people are saved. “The savings are far greater than the mortal damage that has been inflicted from the corona virus worldwide.

Following the Burke, now European Space Agency experts have also compared air pollution before and after quarantine in Italy. For this purpose, they used groundwater photographs, taken from “Copernicus Sentinel 5P satellite”.

They also revealed that the closure of industrial activities, cars, trucks and power plants from the Corona virus has had a very positive impact on the environment as well as the amount of nitrogen dioxide gas in the atmosphere, has decreased.

A short video has also been released by the European Space Agency about this: Click to watch video here

Watching this video, it can be inferred that the global outbreak of the Corona virus in environmental terms is proving to be a “mercy in disgrace” as environmentalists have proved that air pollution is the largest killer in the world at present. As a result, the average age of people in some places has also decreased by three years