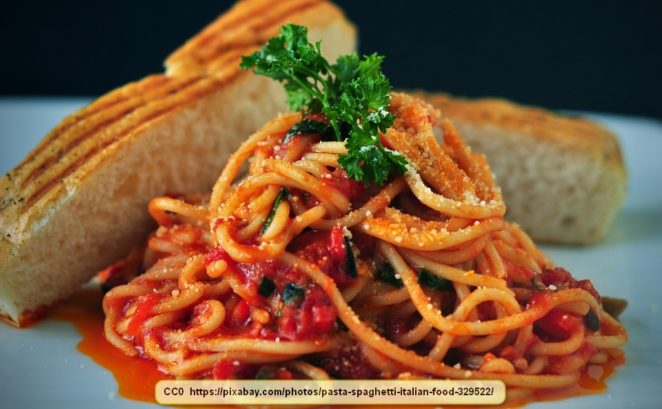 Among the meals that we have fairly often is homemade spaghetti. We have this at least once or twice a month. It isn’t something we often get tired of, primarily because I never make spaghetti the same, twice in a row.

I might use ground beef or ground venison or ground turkey or sausage. I might use a combination of these. I might include onions, celery, bell peppers, zucchini, mushrooms, black olives, or leeks. I might use tomato sauce, tomato paste, stewed tomatoes, tomato soup, chili sauce, or salsa. I nearly always add oregano and basil as seasonings, though in varying amounts, but I also might add rosemary, sage, thyme, garlic, chives, or parsley. I’ve added soy sauce, steak sauce, liquid smoke, brown sugar, lemon juice, or vinegar.

The point is that it is never quite the same, any two times I make spaghetti. There is enough variation that we don’t get tired of it. I also tend to make a big pot of it because it never lasts long. People heat up leftovers for lunch the following day.

However, one of my favorite ways to eat leftover spaghetti is as spaghetti soup. This is incredibly easy. It is basically just a bowl of spaghetti and sauce, with water added, then it is heated until it is hot, usually in the microwave for a couple of minutes. It tends to be thin, like soup, but it has the flavor of spaghetti. It makes an excellent lunch, to me anyway.