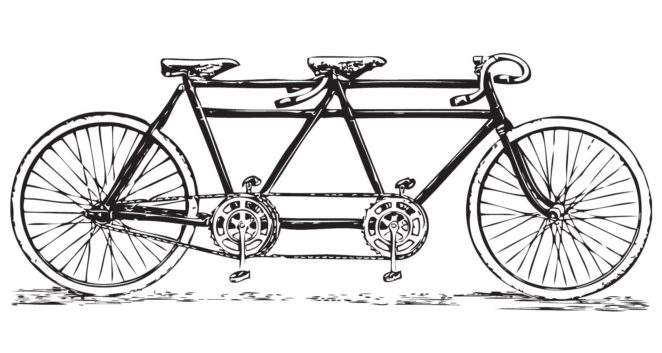 My wife and I were watching a British murder mystery show the other day called “Midsomer Murders.” The show, which has been on the air since 1997, deals with a detective, a DI they call him, who solves murders in a fictitious part of England called Midsomer. It’s an excellent show. I highly recommend it.

In this particular episode, there was a bicycle race going on in one of the towns and a local children’s choir was being trained to sing the song “Daisy Bell” at the festivities. That’s what the song is called in the UK. In the USA it’s better known as “A Bicycle Built for Two.”

The song was written in 1892 by a British man named Harry Dacre. It is believed that the Daisy being sung of is Daisy Greville, Countess of Warwick and mistress of King Edward VII. Dance, a popular English composer during his lifetime, visited the United States. He brought his bicycle with him and was forced to pay an import duty. William Jerome, another songwriter and friend of Dacre’s quipped “It’s lucky you didn’t bring a bicycle built for two, otherwise you’d have to pay double duty.” Dacre was intrigued by the phrase “bicycle built for two” and used it in the song.

The song became popular in the London music halls where it was sung by Katie Lawrence. Tony Pastor brought it to the USA. In 1893 it was recorded by Dan W. Quinn. Other artist to record it include Bing Crosby, Alvin and the Chipmonks and Nat King Cole. There is even a hip hop version performed by Jimmy Urine and Chantel Claret.

In 1961 computer scientists working on speech synthesis programmed an IBM 7094 computer to sing the song. In the 1968 Stanley Kubrick film “2002: A Space Odyssey” the HAL 9000 computer on the space ship sings it as it is being disabled by Dave, the astronaut the computer tried to kill.

There is a flower within my heart, Daisy, Daisy!

Planted one day by a glancing dart,Planted by Daisy Bell!

Whether she loves me or loves me not,

Daisy, Daisy,Give me your answer, do! [true!]

All for the love of you!

It won’t be a stylish marriage,

I can’t afford a carriage,

But you’ll look sweet on the seat

Of a bicycle made [built] for two!

We will go “tandem” as man and wife, Daisy, Daisy!

“Ped’ling” away down the road of life, I and my Daisy Bell!

When the road’s dark we can both despise P’liceman and “lamps” as well;

There are “bright lights” in the dazzling eyes Of beautiful Daisy Bell!

I will stand by you in “wheel” or woe, Daisy, Daisy!

You’ll be the bell(e) which I’ll ring you know! Sweet little Daisy Bell!

I will permit you to use the brake, My beautiful Daisy Bell!

With the song’s popularity a parody version was written to the melody sung as Daisy’s response to her suitor.

You’re half crazy if you think that that will do

If you can’t afford a carriage

There won’t be any marriage

Cause I’ll be switched if I’ll get hitched

On a bicycle built for two