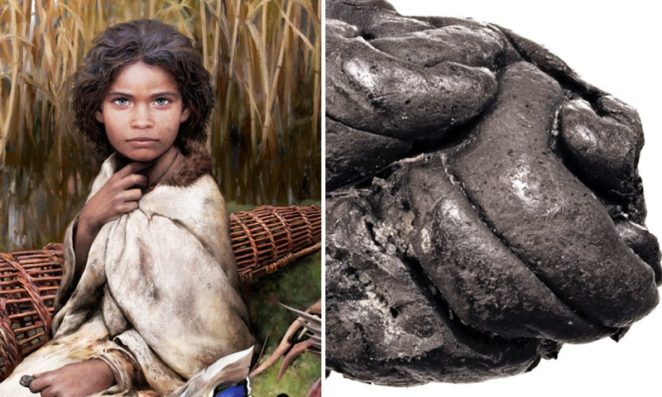 European experts claim Chewing Gum test obtained from a tree detects ancient female genome 6,000 years ago. This is the first time that experts have learned about human evolution by ‘DNA’ of something other than specimens obtained from the human body.

In general scientific methods DNA testing of samples obtained from the blood, bone, hair and other body can give you detail of same human being. After DNA samples are obtained through DNA tests, information about the proximity or contact of other human beings with them is also obtained. It is also through this test that information about the ‘rape’ of a suspect is also obtained.

But now using advance scientific system , EU experts claim Chewing Gum test obtained from a tree detects ancient female genome 6,000 years ago. The experts in the European country of Denmark have created a photograph of a woman 6,000 years ago after Chewing Gum”s DNA..

Experts say women of 6,000 years ago were blonde, brown hair and eyes blue as you see in the picture. The Chewing Gum mentioned above is not the same as the traditional Chewing Gum, but is similar to a ‘glue’ style, which was used in ancient times for the treatment of other diseases including pneumonia.

Experts tested the chewing gum that was obtained from the tree and found how the people of Denmark looked like 5,700 years ago. DNA test results showed that women living in Denmark around 6,000 years ago were blonde, brown, and eyes blue.

Following the DNA test results, with the help of an artist created a photograph of a woman living in Denmark 5700 years ago and named the young woman in the picture as ‘Lola’. Lola ‘is actually the name of the area from which scientists obtained Chewing Gum from the tree