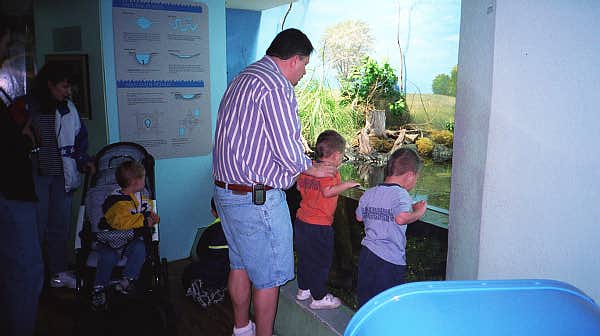 In our last house in Cincinnati we had added a pool our first summer in the house (and what turned out to be the only summer in the house). We enjoyed the experience of having a backyard pool so the first spring in our new house, we added a pool. By July 2001, the pool was operational, and we had guests over. There are a couple of other non-pool events as well in this collection. This comes from a picture disk of a “waterproof” camera that I got. I use quotes because the camera was only rated to be 3 feet or less underwater. Enough so that my daughter could have fun with underwater pictures, so she did. Over the years I would say 80% of the underwater pictures I have, were taken by my daughter.

Pictures 5-9 are really interesting pictures. The first ones are of the play yard we had for the kids, then out towards the pond. You can see in the far right corner of the pond picture the railroad trestle. The tracks were still in use, the Indianapolis Power and Light company used them to move coal from the Jasper Indiana area (very far south of Indianapolis) to the IPS power plant on the south side of Indianapolis That power plant provided power for a lot of southern Indianapolis and Greenwood Indiana. I drove by it often when I was working with customers in Downtown Indianapolis. There were a few customers sins downtown Indy I got to work with over the years.

The 6th picture is of something, but I couldn’t tell you what it is or was.

The last two pictures turned out very well. One was of an rainbow racing across the sky after a storm. The last one was of the setting sun looking over our pond. I get to say it was our pond. If you lived in a house on the water area, the HOA charged you an extra fee to live there. That extra fee was used to maintain the pond. Mostly that meant treating the water once a year to reduce the algae growth. But it also meant it was my pond! Well ½ my wife’s so I guess our pond. Oh yeah and our neighbors, they owned a piece of the pond as well, they paid the same fee we did. Mowing by our pond, however, was my job. My wife stayed away from the area where the snakes were.