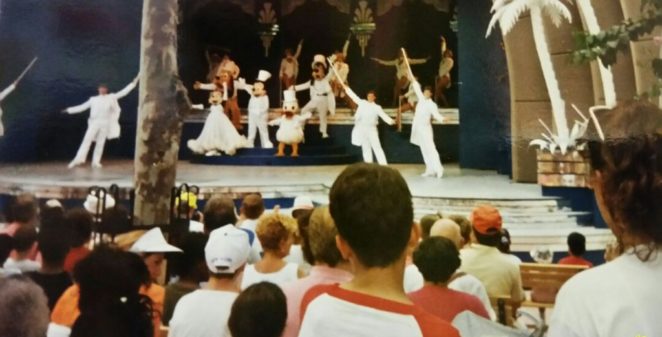 I cannot recall when we decided to visit Disney World. My ten month relationship with Youngor had been going through some rocky times. Less than a month after moving in with her she asked me to move out again. Fortunately my friend Jamal had a tenant who was looking for a roommate. His tenant, Brian worked with him at Morton Thiokol’s Woburn Dynachem plant.

I moved in with Brian and two weeks later Youngor was begging me to move back with her. I had seen enough of he mood swings too many times to consider that a good idea. We continued to see each other but I was tired of moving & Jamal had fallen behind on his mortgage after he got , robbed in London’s Heathrow airport. He was counting on me and Brian to keep his house out of foreclosure. Jamal was still in Sierra Leone. He had asked Brian & I to be there for Laura and baby JJ.

I moved in the first week of March. Jamal had flown to Sierra Leone that previous month, about a week after George H.W. Bush had unleashed “Operation Desert Storm”. He was robbed in London and delayed in West Africa. Years later I would learn that Jamal had gone through a period of doubt, and had considered staying in Africa. While he wrestled with his decision and contemplated leaving Laura, Jamal fell behind on his mortgage payments. By the time his conscience moved him to return the bank had initiated the process to foreclose. In a matter of months we would all be required to leave the house on Clifton Avenue.

Youngor was begging me to move back in with her. l was quite content living at Clifton Avenue, seeing her on my terms. We decided to travel together and spend a week in Florida in June. I booked a flight to Tampa and a room for us at the Days Inn near Martin Luther King Boulevard. I rented a red 1991 Chevette. Each morning we drove route 4 to Orlando and visited the Magic Kingdom, Epcot, and Universal Studios. On the drive back we’d stop at Popeyes Chicken. We didn’t fight all week, hard to get angry when you get to hang out with Mickey Mouse and ride Space Mountain. One night we visited Ibor City and ate at a restaurant with a Flamenco Dance floor show. Youngor, who had once danced in Ethiopia for the family or Haille Selassie, the Lion of Judah, said the show was “terrible”.  I had seen several flamenco dancers before and thought it was pretty good. At least we could agree on Mickey, and the Pirates of the Carribean ride.

Overall we we’re doing pretty well but I still had reservations about moving back with her. We went to Busch Gardens and lamented how tired the wild animals looked. We returned to our hotel, and I suggested we see the Spike Lee film “Jungle Fever”, which had premiered the week before and was on the cover of the Time Magazine I brought on our flight. Youngor wasn’t interested. She liked comedy and musicals, not much else. Youngor went shopping. I went to the film alone. Next day was our final trip to Disney for the week. I shook Pluto’s hand, apologized for calling him Goofy. It’s nice there are places where you can be thirty-something and act like a kid. I guess that’s why they call it a Magic Kingdom.