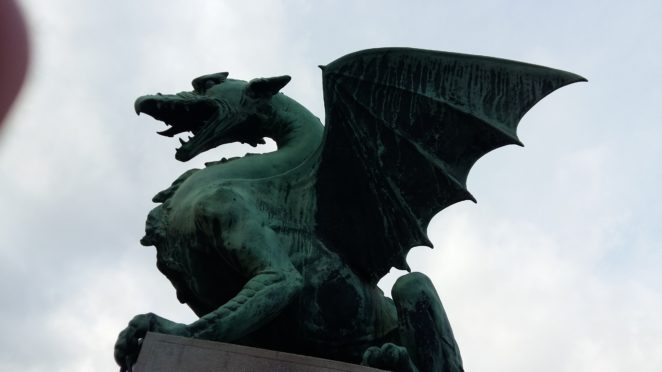 Let me explain to you a little more about where and why Dragon is the symbol of the city of Ljubljana.

On the way to the sea, at the source of the Ljubljanica River, they stopped at a large lake on the marsh, where a monster lived. Jason struggled with her, defeated her and killed her. This monster is supposed to be the Ljubljana dragon, which today is a recognizable symbol of the city and also appears in the city coat of arms of Ljubljana, but only from the Baroque period.

The symbol of the city is taken from the coat of arms by the Ljubljan dragon. It symbolizes power, courage and greatness. It is painted on the coat-of-arms, above the fortification, which represents a fortified medieval city, and four times materialized on the Dragon Bridge, which is considered the most beautiful bridge of the Viennese Secession. The long dragon was only an ornament on the top of the coat of arms, and from Baroque, it stands out. Valvasor puts the dragon in his coat. Previously, only the Ljubljana castle was in the coat of arms, which is becoming smaller when the dragon appears in his coat.