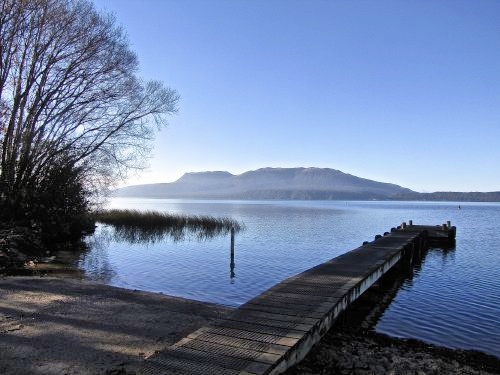 This is Lake Tarawera, Rotorua, New Zealand. We went about 5 years ago and stayed at the Blue Lakes Holiday Grounds. We got a nice cabin with central heating and the prices were very reasonable. Apparently there were Wallabies about as well. Governor Grey brought Wallabies from Australia to New Zealand a long time ago, but we don’t see many of them here.

Lake Tarawera was where there was a huge volcanic eruption about 1886, People came from miles away from Europe, America and other places just to view the famous Pink & White Terraces. A famous artist, Charles Blomfield felt it really important to paint them which is very fortunate.

All along there was a certain Maori Tohonga locally who did not like the tourism this brought to the area, it was a sacred Mountain being violated by greed, so he put a curse on it. You didn’t cross a Maori Tohonga, they were something like medicine man, spiritual leader and knowledgeable person. He was fed by maidens from a stick, in those days if people touched the Tohonga, they died. A lot of people were very frightened of them.

Now one day there was a mist over this lake and a canoe with Maori Warriors were on it. A Canoe, was called a “Waka”. It disappeared into the mist and wasn’t seen again. It was an indication of an omen and bad luck.

Now I met Charles Blomfield’s grand daughter and she told me, that in those days there was an outbreak of Typhoid which killed so many Maoris and white men there was no more room to bury the bodies. So they put dead Maoris into a canoe and let it go to where ever it would go into the lake. That is a logical explanation.

Not long after wards a huge volcanic eruption occurred and lots of people died. The Blomfield family survived. Today you can get the whole story by visiting Rotorua in New Zealand and going to the Buried village.