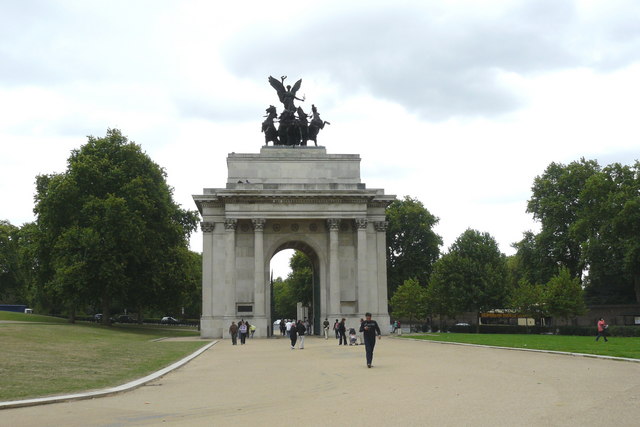 The area around London’s Hyde Park Corner is of great interest to anyone who admires the memory of one of Britain’s greatest ever generals, namely Arthur Wellesley, the 1st Duke of Wellington (1769-1852), who was the hero of the Battle of Waterloo.

For one thing, this is where you will find the Duke’s London home, Apsley House, which once had the iconic address “No 1, London” because it was the first house inside the turnpike gate at Hyde Park Corner, which is traditionally the point from which all distances to London from everywhere else in the country are measured.

Apsley House, now under the care of English Heritage, is open to visitors and contains many paintings and other items that were formerly owned by the Duke of Wellington.

Opposite the front of Apsley House is a small green area, surrounded by a busy traffic circulatory system, on which are several memorials and monuments of military significance.

The most notable of these is the massive Wellington Arch – not to be confused with Marble Arch which is at the northeast corner of Hyde Park as opposed to the southeast. It was built in 1826-30 to a design by Decimus Burton and was originally sited as the western entrance to Constitution Hill, which runs from Hyde Park to one side of Buckingham Palace. However, it was moved a short distance to its present position in 1882-3, although it is still in alignment with the course of Constitution Hill. The Arch is also known as Constitution Arch.

The Arch originally had a large equestrian statue of Wellington on top, but this was moved to Aldershot in 1887 to eventually be replaced by a statue by Adrian Jones entitled “Peace in her Quadriga”, which was cast in 1912 and remains Europe’s largest bronze statue.

The Arch contains rooms on either side and across the top, and these are open to the public who can view an exhibition about London’s statues. From the 1950s until 1992 these rooms comprised London’s smallest police station, providing a base for two sergeants, 10 constables and a cat!

Directly opposite Apsley House, and therefore at an angle to Wellington Arch, is the monument that took the place of the one that was removed from the top of the Arch. This is a bronze, by J E Boehm, of Wellington astride Copenhagen, his favourite warhorse. It was erected in 1888.

Copenhagen was certainly a remarkable horse, having been Wellington’s mount at the Battle of Waterloo for more than 16 hours all told. The story goes that, after the battle, Wellington dismounted in the stable block and Copenhagen, relieved to be off duty at last, lashed out with such fury in his master’s direction that, had he connected, Wellington would have joined Nelson as a great military victor cut down in the hour of his triumph.

The Memorial statue stands on a stone plinth that is “guarded” by the figures of four soldiers who are representatives of troops at the Battle of Waterloo. These are a Grenadier, a Welch Fusilier, an Inniskilling Dragoon and a Royal Highlander. These figures were cast from 12 French cannons that were captured during Wallington’s campaigns.

The Statue of Achilles

On the other side of Apsley House, just inside Hyde Park, is a somewhat curious memorial to the Duke of Wellington, namely a huge bronze figure that purports to be Achilles.

This was the “Ladies’ Trophy”, so called because it was paid for by subscriptions from the women of Britain as their tribute to the Duke. It was modelled by Sir Richard Westmacott and erected in 1822.

One problem with the statue is that it has nothing to do with either the Duke of Wellington or Achilles. It is actually a copy of a statue of a horse-tamer, with sword and shield, in Rome. However, the main reason why it raised plenty of eyebrows in 1822 is that the warrior depicted is almost entirely naked without even the benefit of a fig-leaf! The question has often been raised about how much the ladies who commissioned the statue knew about what they were going to get!