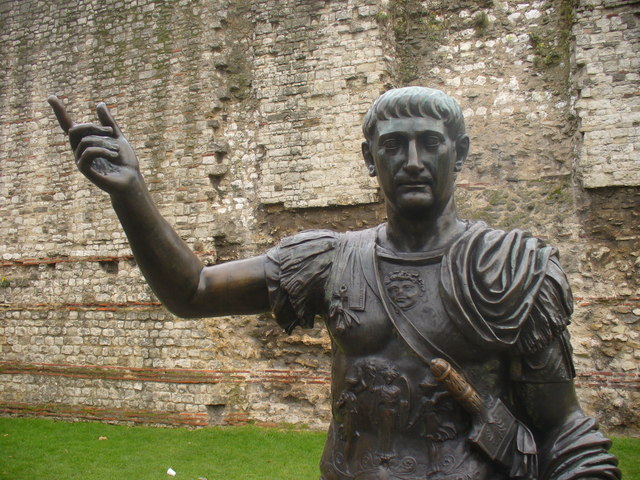 Marcus Ulpius Trajanus, who is usually known as Trajan, was born near Seville, Spain, on 18th September 53 AD (although some sources say 52 AD). He was a soldier from an early age, serving for ten years as a military tribune before becoming a praetor in 85 AD. He served with distinction in the Eastern Empire and in Germany. He became a consul in 91 AD and was adopted by Emperor Nerva in 97 AD.

Nerva died in January 98 AD, so Trajan became emperor, the first to have been born outside Italy. He was widely acclaimed and there was no opposition to his succession.

At the time of his accession he was fighting to establish Roman dominance on the Rhine and Danube frontiers, and he continued to do so during the first few months of his reign, including the building of fortifications and roads in the area. When he eventually returned to Rome, in 99 AD, he and his wife entered the city on foot.

However, in March 101 Trajan resumed his campaign on the Danube, where he was determined to make war on the Dacians, led by Decebalus, in what is now Romania and Hungary. Decebalus had compelled Domitian (emperor 81-96) to make peace on humiliating terms, and Trajan wanted to set this right.

The war was in two parts, the first lasting until 103, when Decebalus was defeated and sued for peace. However, this was merely to buy time until he had rebuilt his defences and forces and felt strong enough to resume the fight. The second Dacian War, from 104 to 106, resulted in the complete defeat of Decebalus, after which he took his own life.

Dacia now became a province of the Empire, with a permanent bridge built across the Danube, new forts established, and colonies of people from other parts of the Empire encouraged to settle there.

When Trajan returned to Rome, bearing the head of Decebalus, he was received with great jubilation. The monument known as Trajan’s Column, which still survives, was erected in celebration of his triumph. This remarkable edifice, completed in 113, is 98 feet high and 11 feet in diameter. The story of the Dacian Wars is told in relief carvings that spiral their way up the column in a continuous frieze, the upper parts of which would clearly have been invisible to anyone at ground level. However, it is from this column that much of our knowledge of Roman military tactics and equipment derives.

(Part of the relief on Trajan’s Column)

More immediately, Trajan’s triumph was celebrated with games that lasted for 123 days, involving 10,000 gladiators and the slaughter of 11,000 animals.

After a period of relative peace, Trajan left Rome in 114 to make war on the Armenians and Parthians (who inhabited modern day Iran and Iraq). During 115 and 116 Trajan was able to subdue the Parthians, reaching as far as the Persian Gulf. However, in 117 Trajan fell ill and decided to return to Rome, leaving the campaign in the hands of his nominated successor, Hadrian.

Trajan died in August 117 at Selinus in Cilicia (Asia Minor), aged 63, and his ashes, in a golden urn, were taken to Rome where they were buried with great ceremony under his column.

Apart from his military exploits, Trajan was also an excellent administrator and financier, aided in great measure by the gold mined in the new province of Dacia. He added to the network of Rome’s great roads, building important bridges and aqueducts, plus the forum in which his column stands today.

He was not well educated, or a man of learning, but he had sound common sense and believed in fairness and justice. He was strong and good looking, was prepared to live as frugally as his soldiers, and was generally well liked, which is not something that could be said for many Roman emperors.