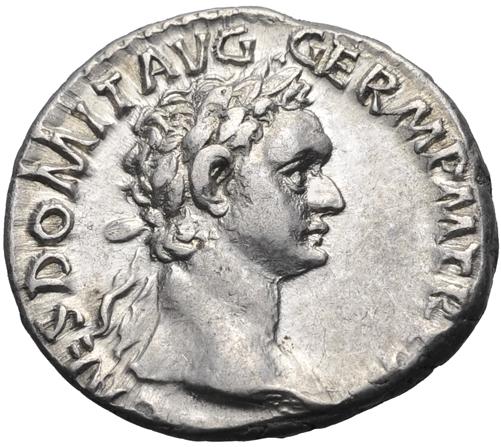 Domitian succeeded his brother Titus as Roman emperor in 81 AD. There is some debate over what sort of emperor he was – good or bad.

Titus Flavius Domitianus was born at Rome in 51 AD, the younger son of Vespasian, who was a successful Roman general destined to become one of the Empire’s better emperors. Domitian’s elder brother was Titus, who also became emperor.

The year 69 AD was the “year of the four emperors”, during which Rome went through a period of chaos following the overthrow of Nero the previous year. Vespasian was declared emperor by the eastern legions on 1st July, while he was on campaign in Palestine accompanied by Titus. Domitian, as the son of a rival claimant, was therefore in grave danger from the incumbent, Vitellius, and he only narrowly escaped with his life by staying in hiding until Vitellius was overthrown and murdered in December. Domitian, aged only 18, then emerged from hiding and awaited the arrival of his father to accede to the imperial throne.

Under Vespasian, Domitian took very little part in government, not having been entrusted with any official role by his father, and he spent most of his time living on a country estate and devoting himself to artistic pursuits such as poetry. There seems to be evidence that Domitian gave way to temptation in some respects, which is hardly surprising seeing that he was a young man with plenty of money and time on his hands and with nothing to do but enjoy himself. The fact that he had no official role would have led to behaviour that would ensure that no such role would ever come his way. History is full of “playboy princes” of whom the same story could be told.

When Vespasian died in 79 AD the imperial power passed effortlessly to his elder son, Titus, who also had no role to offer Domitian. One thing to remember is that the brothers were hardly close. Titus was eleven years older than Domitian, and had been fighting alongside his father for much of Domitian’s childhood. They therefore hardly knew each other.

However, it seems highly unlikely that Domitian had anything to do with Titus’s early death in 81 AD at the age of 40. This was almost certainly due to natural causes, and not poison as alleged by some historians based on comments by contemporaries. It is apparently true that Domitian did not show a lot of grief at his brother’s death but instead made every effort to secure the imperial crown for himself, but he would have remembered the chaos caused by the uncertainty that preceded his father’s accession and would therefore have been keen to ensure that no rival claimants could gather support in opposition to him.

It is worthy of note that one of Domitian’s first acts as emperor was to commission a magnificent triumphal arch in Rome to honour his late brother. The Arch of Titus survives (somewhat restored) to this day, and has been the model for many later monuments, such as the Arc de Triomphe in Paris and Marble Arch in London.

Domitian also continued the work begun by Titus to rebuild much of the city that had been destroyed by the fire of 80 AD. However, large parts of the city had been neglected for a number of years, right through the reigns of his father and brother. Domitian was therefore making good the oversights of his predecessors as well as constructing many new public buildings. This largesse made him very popular with the common people of Rome, especially as he was able to introduce economic reforms that meant that all this work did not bankrupt the city or the empire.

However, in order to do all this, Domitian worked largely without consulting the Senate, which was therefore sidelined. Vespasian and Titus had favoured a system that was almost republican, with the institutions of government being given proper roles to play. Domitian brought all those institutions into his own hands, making the important decisions himself. He therefore ruled as a despot, doubtless seeing himself as an enlightened one, although this was an excellent way to make enemies of those who thereby lost power and influence.

In military matters, despite having no military experience prior to becoming emperor, Domitian enjoyed some success. His aims were mainly defensive, particularly at the difficult frontier in Germany along the River Rhine, where a system of defensive walls, forts and roads known as the “Limes Germanicus” was built (“limes” is a two-syllable word, the plural of which is “limites” hence the English “limit”).

However, it is probably true that Domitian made more of his limited military victories than was warranted. For example, he claimed a triumph in his campaign against the Chatti tribe of central Germany in 83 AD. From 86 to 90 AD he was involved in wars against the Dacians (in modern-day Hungary and Romania), where the opposing King Decebalus proved to be a difficult opponent who was not to be defeated until 104 AD, by Trajan. Domitian was forced to make peace on terms that involved the payment of tributes to Dacia, and this was a considerable humiliation to Rome that some senators were not prepared to forgive.

The brightest spot in the expanding empire was Britain, where General Agricola was able to push the border into present-day Scotland, there being evidence of Roman activity as far north as Inverness.

The pattern of Domitian being popular with the people but less so with the patrician class repeated itself in the Army. He was well liked by the common soldiers, among whom he spent a lot of time in the field, and he raised their pay. However, his personal lack of military competence gave rise to opposition and conspiracies.

Domitian tried to reform Roman morals among the upper classes and to restore the cult of emperor worship, although directed towards his deified father and brother rather than himself. He imposed strict discipline in religious matters, with vestal virgins who fell from grace being condemned to death.

It is also true that a number of senators were executed on Domitian’s orders. However, whether this constituted the “reign of terror” of which historians were later to accuse him is another matter.

There were therefore many reasons for some people in high places to want Domitian out of the way, and this led eventually to his assassination on 18th September 96 AD. A plot was hatched that involved a number of palace officials, chief among them being a steward named Stephanus who had feigned an injury some days before so that he could hide a dagger under his bandages. When the attack came, several conspirators struck the blows.

Domitian is one of those emperors on whom the “the jury is out”. When history is written by people in the pay of others who have suffered at the hands of the person in question, it is unlikely to be fair or balanced. At this distance of time it is impossible to know the ultimate truth of what may or may not have happened, and so there is much reading between the lines to be done. That Domitian was a despot is quite evident. Whether or not he was a benevolent one is the point at issue.