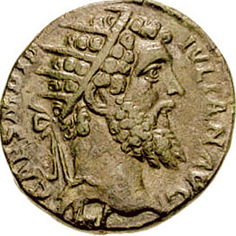 Do you sometimes get cynical about the business of politics and take the view that it’s always the richest person who wins in the end because he (and it usually is a he) can simply buy all the votes? There is a precedent for this – it’s how Didius Julianus became Emperor of Rome in the year 193, although he didn’t have long in which to enjoy the job he bought.

The first few months of 193 were a turbulent time in Rome. Emperor Commodus – who had been one of the least worthy emperors to date – was murdered on 31st  December 192 but his assassins had not thought very hard about what would happen next. The following day they offered the job to somebody who they thought would do their bidding, namely Pertinax.

However, Pertinax refused to play the role of docile puppet and promptly set about alienating the very people that he needed on his side, namely the Praetorian Guard who were supposed to be an elite fighting force and the Emperor’s personal protection squad.

(Members of the Praetorian Guard)

Elite soldiers gone to the bad

The problem was that Emperor Commodus had allowed the soldiers who formed the Praetorian Guard to become lazy and sloppy. They were very well paid, and some of them were not averse to engaging in criminal activities to boost their income further. They loved their luxurious lifestyle and enjoyed nothing more than throwing their weight about on the streets of Rome as the emperor’s enforcers and bully-boys. What they wanted they got, and nobody could lift a finger to stop them.

But then along came Pertinax who tried to reform the Praetorian Guard and instil some military discipline where it had been sadly lacking. Not surprisingly, this did not go down too well with the Guard members, and they took their revenge in no uncertain way by storming the imperial palace and murdering Pertinax after he had been in power for only 86 days. There was now absolutely no doubt who was in charge in Rome – the Senate was powerless to act against this brigade of murderous thugs.

What tended to happen when the post of emperor suddenly fell vacant was that a strong contender, with the backing of at least one Roman legion, emerged somewhere in the provinces and promptly marched towards Rome to stake his claim. The Praetorian Guard knew this and they also knew that they needed to put someone in place quickly who could counter any such threat.

However, they also wanted someone who was much more like Commodus than Pertinax, namely an emperor who would continue to indulge them in their pampered lifestyle. So which was it to be? Continued luxury or a strong leader? They plumped for the former, and they came up with a way of ensuring that that was what they got.

They therefore invited candidates for the post to offer bids in terms of the bonus that they would pay members of the Guard. The man with the deepest pockets, irrespective of any other qualities he might or might not possess, would be the next emperor.

Two candidates came forward. These were a city prefect named Flavius Sulpicianus and a senator named Didius Salvius Julianus who had held various government posts and acquired enormous wealth through questionable management of his responsibilities.

Flavius Sulpicianus was visiting the army camp to make his case when Didius Julianus turned up. He had heard about the auction – for that was what it was – when attending a family banquet, and his wife and daughter urged him to make a bid. The chance to suddenly become the imperial family was one that they wanted to seize, even though Didius himself might not have been so keen at first.

The guards at the gate to the army camp refused to let Didius enter, on the grounds that he was a senator and therefore a potential enemy, so Didius had to shout out his bids and wait for them to be conveyed to the auctioneer, in a similar way to how telephone bids are received at a modern auction.

The point at issue was the bonus per man that each candidate was willing to offer the Guard members on top of their annual salary, which stood at around 1,300 sestercii. Flavius Sulpicianus had to stop when the figure reached 20,000 sestercii but Didius Julianus could top that by offering 25,000 sestercii. Given that this would be paid to each of the 2,000 Guard members, one can appreciate just how much money was involved and also just how shabby was the entire procedure.

The Senate had no choice but to accept Didius Julianus as the new emperor, but the Praetorian Guard had reckoned without the real arbiters in all this, namely the people of Rome, both inside the city and in the wider Empire.

When the news broke about how Didius Julianus got the job the people’s anger was aroused to the extent that Didius could go nowhere without insults and even stones being hurled in his direction. He and his family soon became self-imposed prisoners in the imperial palace and not the exalted overnight celebrities that the wife and daughter had fondly imagined they would be.

As some Praetorian Guard members had feared, there was a strong contender for imperial office making his way towards Rome. This was Septimius Severus, commander-in-chief in the Balkans, who had started his journey as soon as news about the death of Pertinax had reached him. Septimius was accompanied by proper soldiers who knew all about campaigning and fighting, unlike the poorly trained and soft-centred Praetorian Guard.

Didius Julianus hope to save himself by doing a deal with Septimius by which they would be joint emperors, but Septimius did not see this as a good move. Instead, Septimius came to an agreement with the Praetorian Guard that most of them would be spared if they gave up the murderers of Pertinax. This was enough for the Senate to find its courage and call for the execution of Didius Julianus.

Didius was killed in his palace by a member of the same Praetorian Guard that had organised his appointment only two months earlier. His “reign” had therefore been even shorter than the 86 days of Pertinax.

Once installed, Septimius Severus disbanded the discredited Praetorian Guard and took his time in establishing a completely new replacement.

Fortunately, the experiment of auctioning the imperial office was widely seen as a dismal failure that besmirched the honour of Rome, and it was not an idea that was ever repeated.