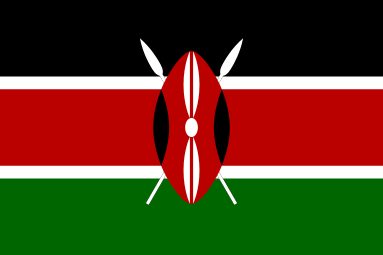 Kenya is a country situated in East Africa. It gained independence from its colonial master, Britain on December 1963 and became a republic in 1964.

The country measures 580,367 square kilometres. It is thus ranked as the 48th largest country in the world by the above total area.

In terms of population, the estimated figure is 53 million (53,924,286) per the recent national census that was carried out this year.

Kenya derives its name from Mt. Kenya which is the highest mountain in Kenya and the second highest peak in Africa.

Where did Kenya get her name from? No one knows. The British did name her by that name. The word didn’t exist in any of the tribes found in Kenya. Mt. Kenya was called in different names by the tribes that lived near it. It might be one of the local names of the mountain was shortened to Kenya by the first missionaries to the area. Or, it might have been derived from the first president of Kenya, Jomo Kenyatta. Thus, the word Kenya has no meaning whatsoever associated with it.

Kenya has been ruled so far by four presidents: Jomo Kenyatta, Daniel MOI, Mwai Kibaki and Uhuru Kenyatta who is the current president. He is the son of the first president of Kenya.

Agriculture is the backbone of the country followed by tourism. Tea, coffee and flowers are the major export commodities. Kenyans prefer tea than coffee.

Kenya is home to a number of wild animals including the cat family, elephant and giraffe, wildebeest, lesser kudu (History Gal wrote an article on Alphabet challenge about this animal), and bufalo to name a few.

Hunting of animals in Kenya as a game or as raw materials is illegal. Several people have been caught and arrested for killing elephants for their tasks.

Nairobi is the capital city of Kenya followed by Kisumu located near Lake Victoria and Mombasa in the coastal area. The lake is shared by three countries: Kenya, Tanzania and Uganda. It’s the second largest freshwater lake and the largest tropical lake in the world.

Kenya is home to over 46 tribes. It is a democratic country and capitalist.

The well-known tribe is the Maasai due to their culture mostly associated with their wearing and adornment of ornaments around their bodies. The Maasai men are also known as fearless hunters and warriors using their spears and shield.

Kenya and Tanzania share the largest migration of animals from one part of the nation to another in search of pasture. It usually involves migration of wildebeests, zebras and gazelles. It’s estimated over 1.5 million wildebeests, 350 000 Thompson’s gazelles and 200 000 zebras migrate from Serengeti in Tanzania to Maasai Mara in Kenya.Crossing the River Mara is the most difficult journey for these herbivores as the river is infested with crocodiles.

If you would like to witness flamingoes in their natural habitat, you can behold them at Lake Bogoria during the rainy season.

Kenya has only two seasons: Summer and Winter or Dry season and Rainy season.

The national language of Kenya is Kiswahili and official language is English. English is usually taught from Kindergarten or Nursery with Kiswahili taught only during the Kiswahili lesson.

Kiswahili was a result of the marriage between Arabs and Bantu tribes that were located in the coastal area.

The well-known known Kiswahili words among the tourists is Jambo (How are you),  Sijambo (I’m good), Habari yako (How are you) and Nzuri (Good).

The above are a few facts about Kenya.

Asanteni (Thank you all)