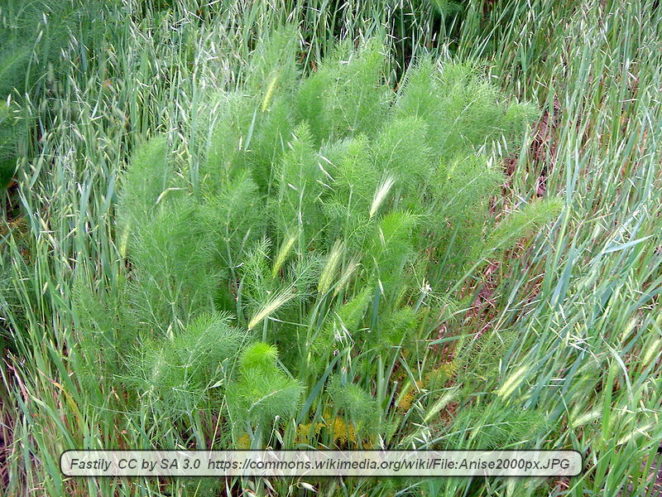 Wild anise (Pimpinella anisum) is an annual plant that was initially grown in the Middle East. It has now become naturalized in many places around the world so it grows in most countries. It prefers growing in areas that get a lot of moisture and a combination of both plentiful sunlight and shade. (Note: Anise, also called Aniseed, should not be confused with star anise, which is an entirely different plant.)

It is quite important to identify this plant properly since it often grows in the same range where poisonous water hemlock grows and the two plants have a somewhat similar appearance. It isn’t hard to identify the plant though. If you crush a leaf or seed of wild anise, there is an unmistakable and pleasant smell that is quite licorice-like. Water hemlock frankly stinks.

Wild anise has many great medicinal uses. The herb has a mild action so wild anise can be used for even young children.

As an example, many years ago, I went camping with my wife, our son, his wife, and three of their children.

Our youngest grandchild was upset, cranky, and crying, but I didn’t think much about it because the infant was in unfamiliar surroundings, which could cause him to act that way. His whimpering continued until he fell asleep, a couple of hours after dark.

As normal, I was up about 5 am the following morning. My son got up about an hour later and we sat for a time, drinking coffee. His wife got up a while later and only a few minutes passed before the infant child awoke. He immediately began crying.

The child was brought out of the tent and his mother attempted to calm him, but the crying got louder, turning into a wail. The boy was obviously in pain. It was then that our son explained that the child was teething and he’d forgotten the teething medication the doctor had prescribed.

Our son decided that he had no option but to go back home. That would have been the end of a nice camping trip we’d planned for over the course of months.

I’d never been camping in that area, but I told my son and daughter-in-law to give me an hour to see if I could find any wild herbs that might help. I wandered out of camp, looking at the plants without looking for any specific herbs.

It wasn’t long before I saw the wild anise plants. They were past the bloom and there were about a dozen green seeds developing. I smelled and tasted the anise to confirm that it was indeed anise, then I picked a number of seeds, taking them back to camp.

I gave the seeds to my daughter-in-law, told her what it was, and told her that it would solve the infant’s problem. I had her crush the seeds between her fingers, then told her to swab the juice over the child’s painful gums. She didn’t believe me but followed my instructions.

The baby struggled against her until he tasted the licorice flavor. At about the same time he tasted it, no more than two seconds after his gums were swabbed, the child stopped crying, the pain gone.

Wild anise is great for teething pain and toothache pain, as demonstrated by the testimony. It is also quite effective for relieving gas, upset stomach, colic, and for treating bad breath. Most people, including the young ones, like the licorice taste, too.

Like cultivated anise, wild anise seeds can also be used to flavor drinks, confections, breads, and other foods. Even the leaves can be used, but the seeds more commonly are. The flavor of wild anise goes surprisingly well with venison and elk meat, too.

This is a wonderful plant that is well worth the effort of becoming acquainted with. It is also wide-spread. Learning to identify it isn’t difficult to do and it is one of the most useful wild herbs to learn about.