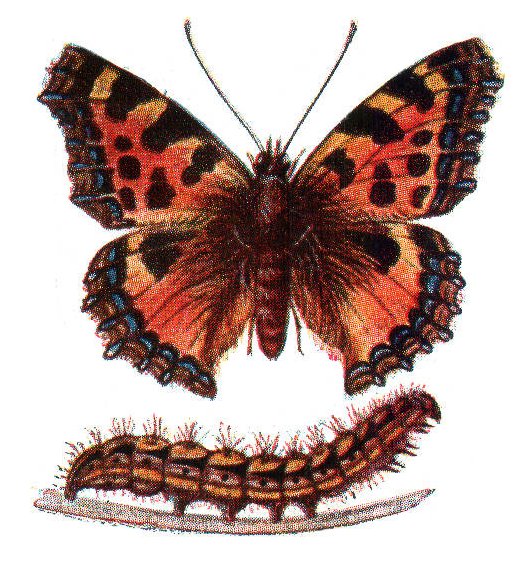 In Victorian times the large tortoiseshell butterfly (Nymphalis polychloros) was regarded as being a common species in the United Kingdom, but that is certainly not the case today. Sightings in Britain are extremely rare, with only around 200 logged over the past fifty years, these almost certainly being specimens that were blown over the English Channel from continental Europe.

One possible cause for the decline is the virtual extinction of the English elm – the result of Dutch Elm Disease – and this was one of the large tortoiseshell’s regular food plants.

If the large tortoiseshell is rare in Britain, that is not the case in other parts of the world. It is quite common in continental Europe and it is also found further south and east – in north Africa, Asia Minor, and even as far east as the foothills of the Himalayas of central Asia.

The large tortoiseshell has a wingspan of 50 to 63 mm (2 to 2.5 inches). It has orange-brown forewings with black markings that are almost circular in the centre of the forewings but elongated at the leading edges.

The hindwings are also orange-brown and do not have as many darker markings as the forewings.

The wing margins are scalloped, with a row of small blue crescents on the hindwings.

There are no noticeable differences in appearance as between males and females.

Female large tortoiseshell butterflies lay their eggs, which are barrel-shaped and red-brown, soon after they emerge from hibernation. The caterpillars hatch after about three weeks and stay in groups on their food plants, which are poplar, willow, elm and fruit trees.

The caterpillars move apart as they prepare to pupate, which they do underneath the leaves of their food plant.

The pupal stage takes two to three weeks after which the imagos take flight from June or July before hibernating through the winter.