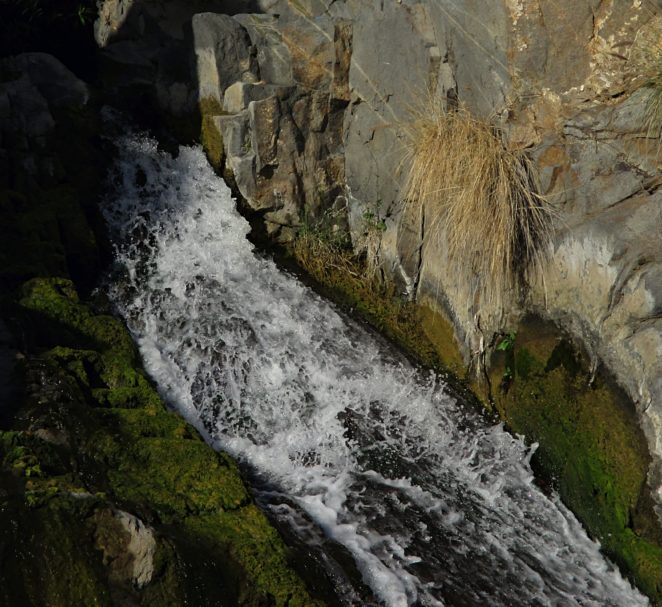 This is part two of https://virily.com/science-nature/we-finally-found-a-new-trail/

Here is an article I wrote here 11 months ago,  you can find it on Google. The pictures are from the last time we visited a year before that, or maybe two..

It tells more of the history and is very interesting.

Here is a part of that ariticle:

These falls sit on the border of two towns, Oceanside and Carlsbad, in San Diego County California, are not open to the public. They were a cultural and spiritual center for the Luiseno Native Americans. The California Native American Heritage Commission has registered El Salto Falls as an official Native American Sacred Site.

The village used to sit just west of the waterfall. A diary written by a member of Gaspar de Portola’s expedition to San Franciso in 1769 mentions the falls and encounters with Native Americans near here. But during the last 40 years the what was once a natural beauty was turned into a rock quarry that has carved away the hillsides on each side of the falls destroying artifacts.

Anyway, here are the rest of the photos from this last weekend. Hope you enjoy.

As I mentioned in my previous post, my son was on the top of the hill fishing into the last pool of the waterfall, and I had time to take some photos. I sat and watched the dogs running around and exploring, it was a warm day but not too hot. You could sit in the sun and not get over heated. There was a slight ocean breeze and it felt so good to just relax, and take it all in. The photos by no means do it justice.

Meika was trying to show the pup the easy way down to the last tier of the fall. But the pup got too scared and ran back. Here is the photo, you can almost hear her say, oh no, no way am I going to follow you. 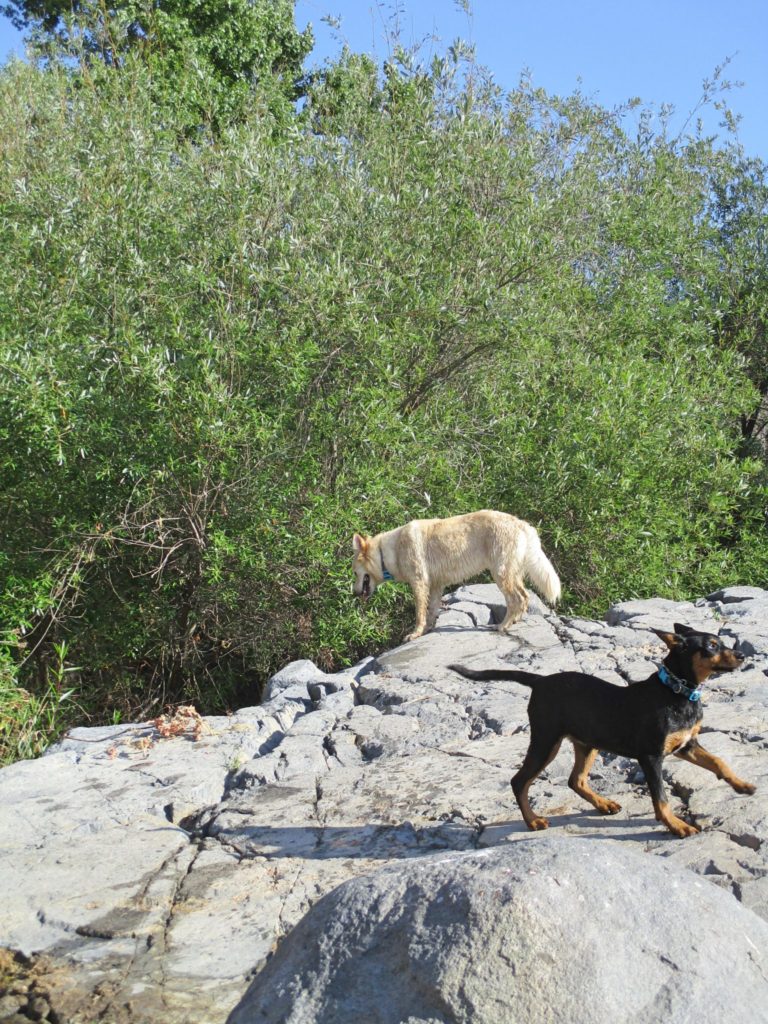 So Meika gave up and just decided to take her to the other side of the main fall. It took Luna a few tries to make it up onto the boulder that has wet prints on it. She had to run and jump over the water, and onto that rock.

There wasn’t much room over on the other side, as I wouldn’t let them go up further. It is just too dangerous for a 4 month old pup.  Meika seemed to realize this and stayed in pup safe places. (She is usually teetering off the edge of the main fall.)  The best wabbits are up there too! 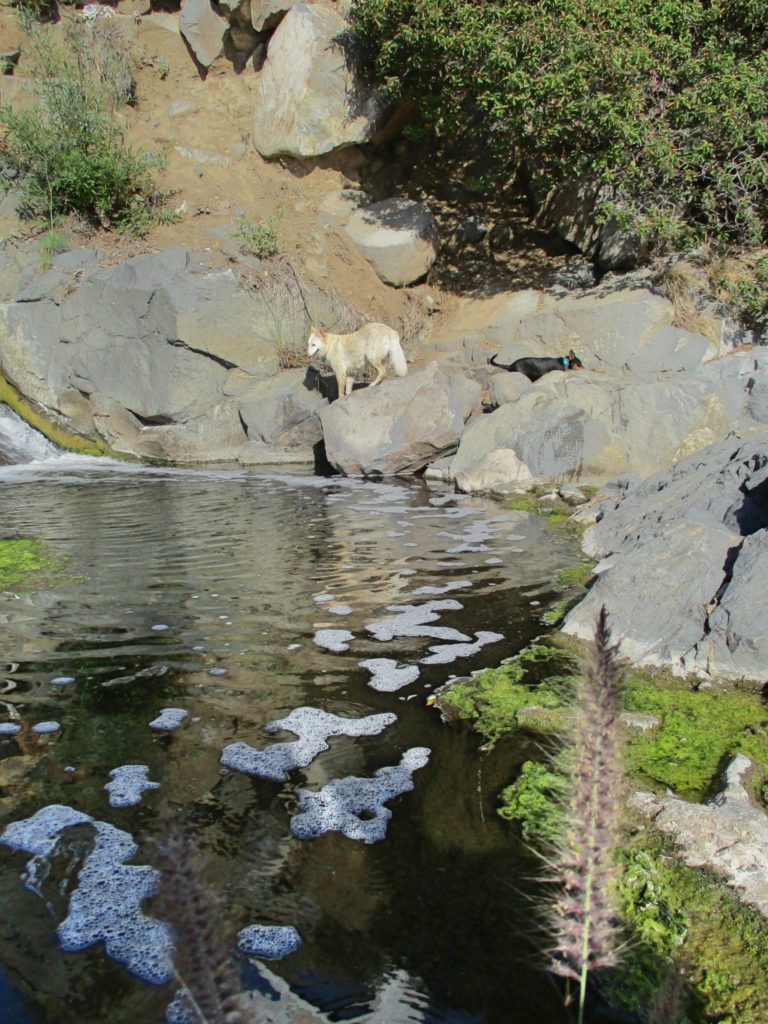 That huge jump over the rushing water is this place. From the wet foot prints above, this is just to the right.

I don’t know if you can tell or not, but the water is actually rushing both ways, toward the front of the frame and going toward the back of the frame as well. The water splits and goes around the rocks. 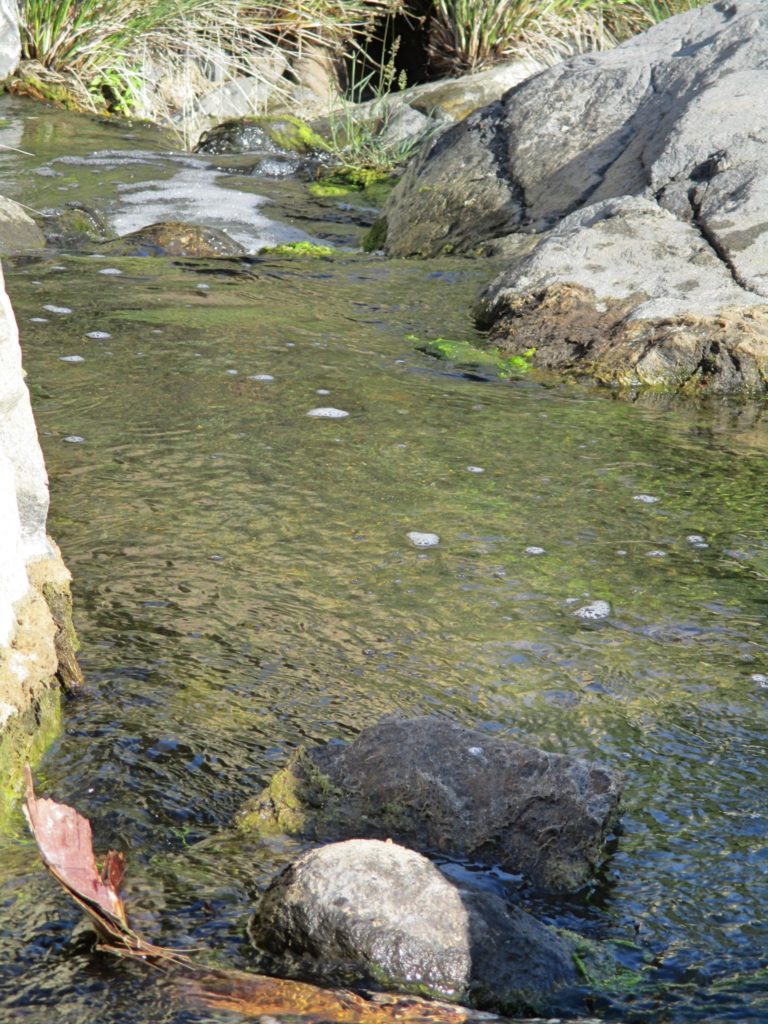 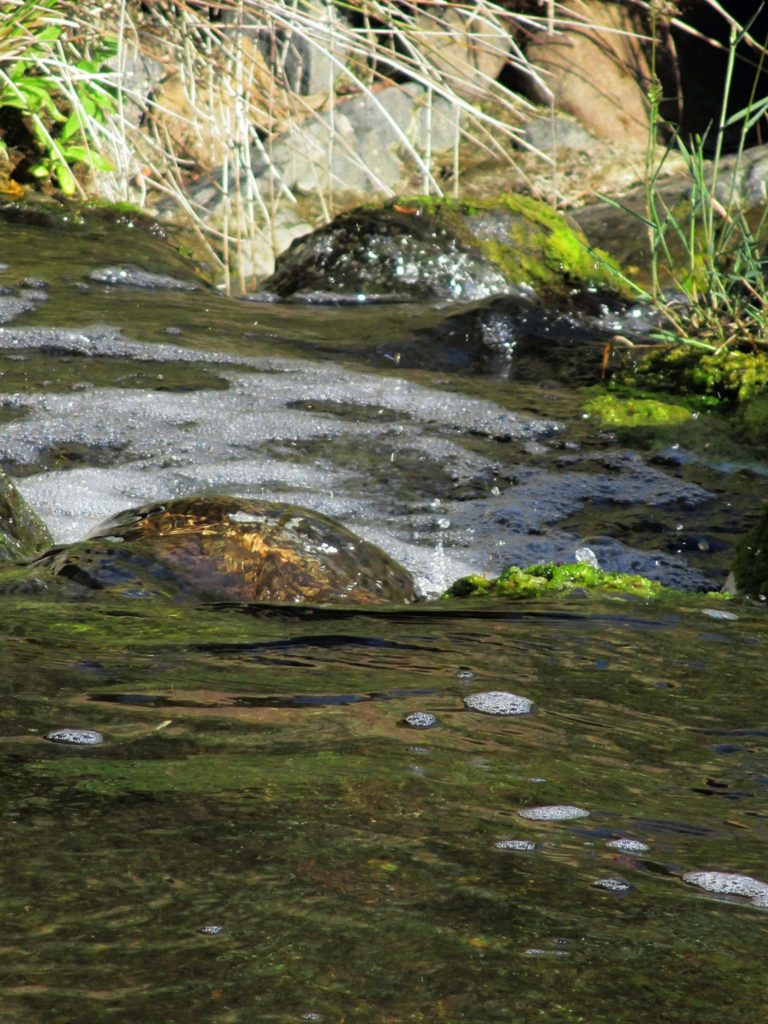 Small amounts of water even go down this way to that pool my son is fishing in. 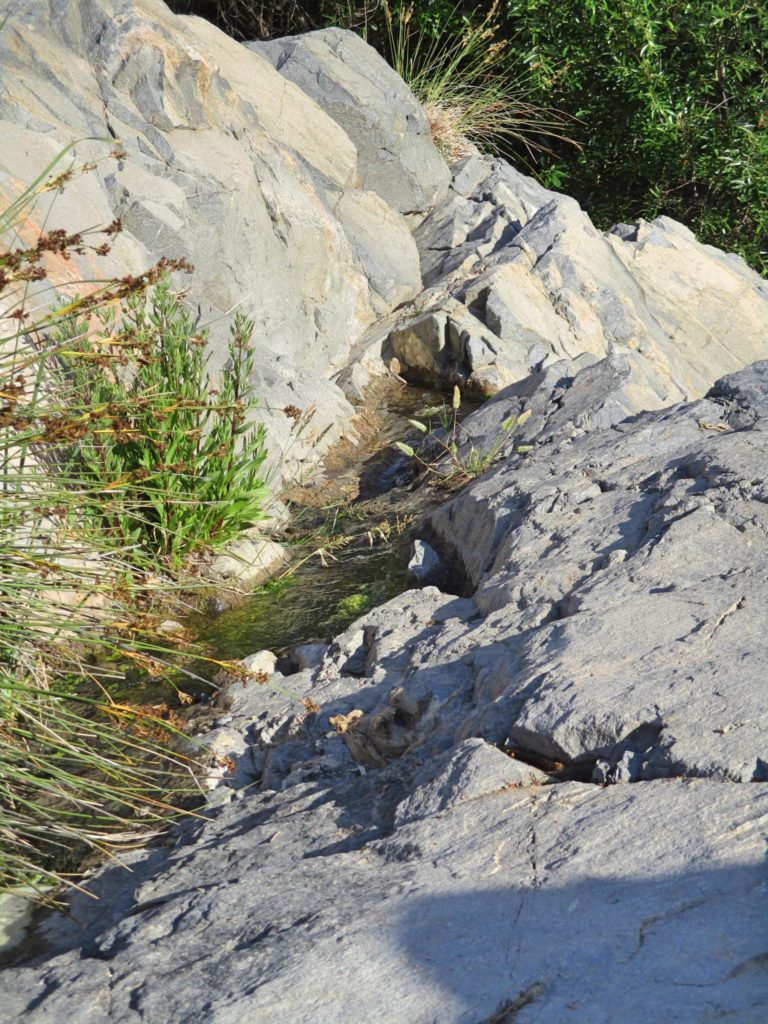 The last pool, as I brave my way to the edge where Meika was just trying to take the pup… No wonder she didn’t want to go..lol The rock face on the right goes up to a platform then a little hill. Someone long ago put a pole in. I don’t know why. 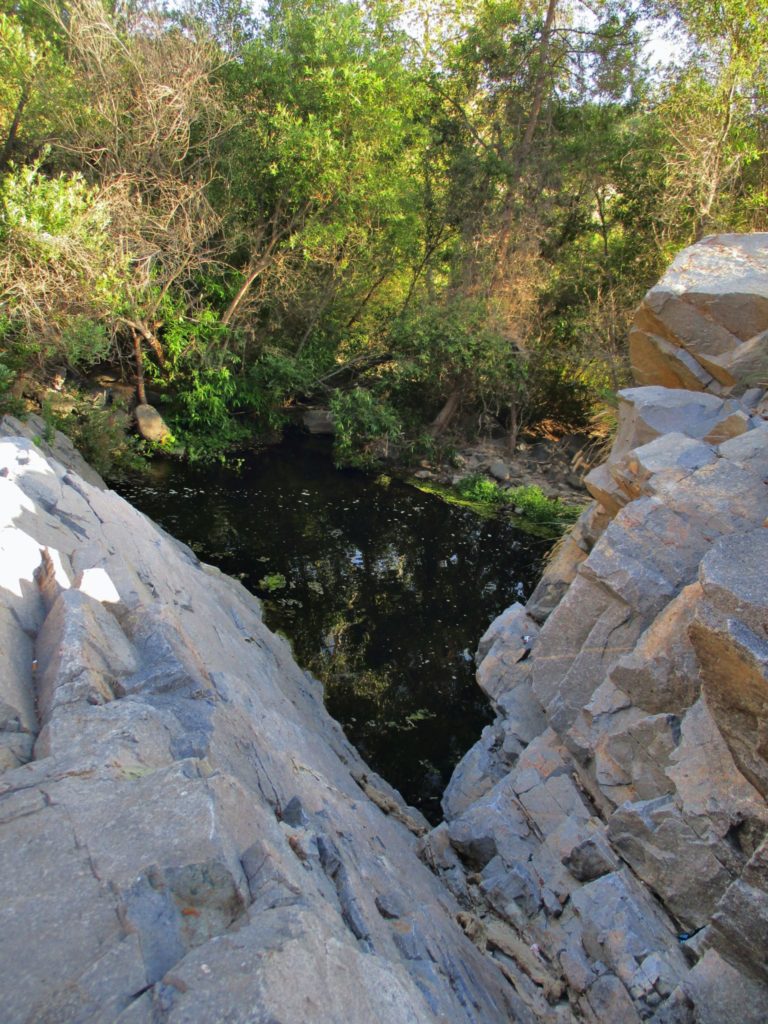 Same angle, zoomed in. The pool is actually very deep. 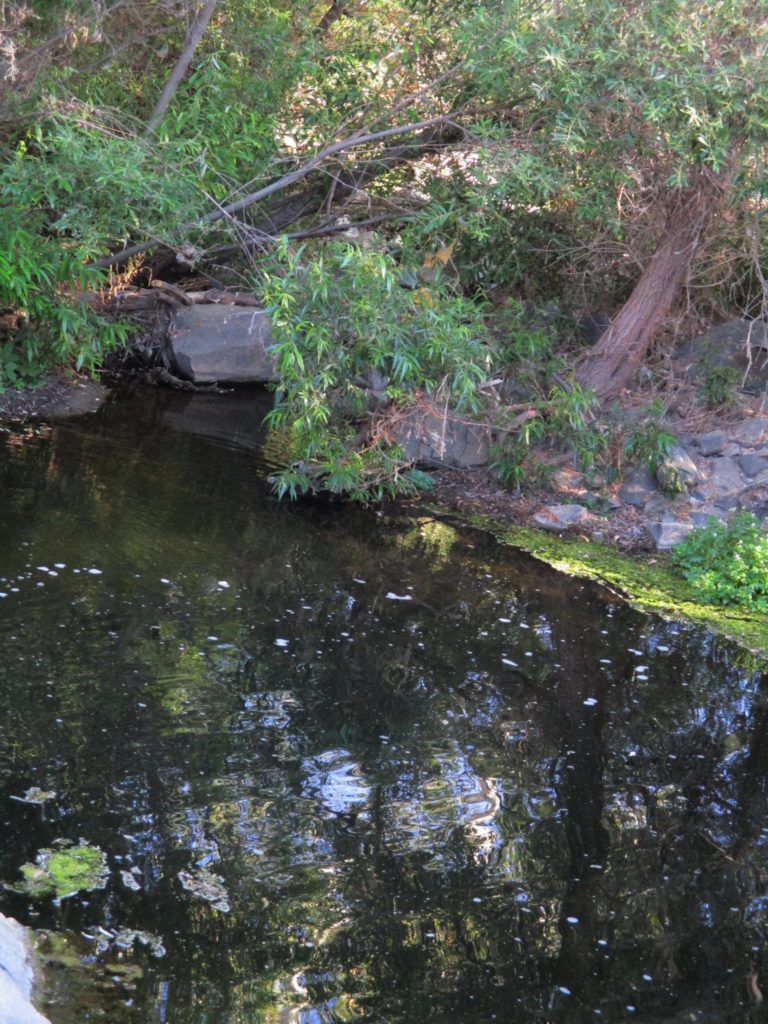 Here is the highest hill above the last pool. I have never been over there. 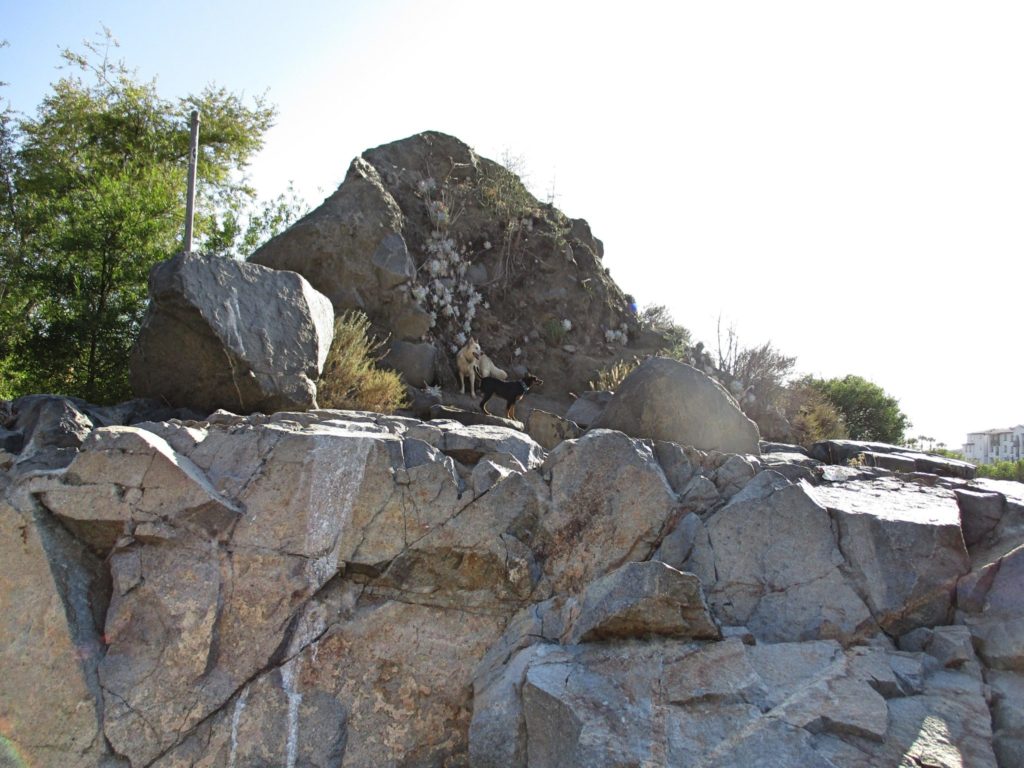 I am afraid of heights, so my son took the camera.. And got this. 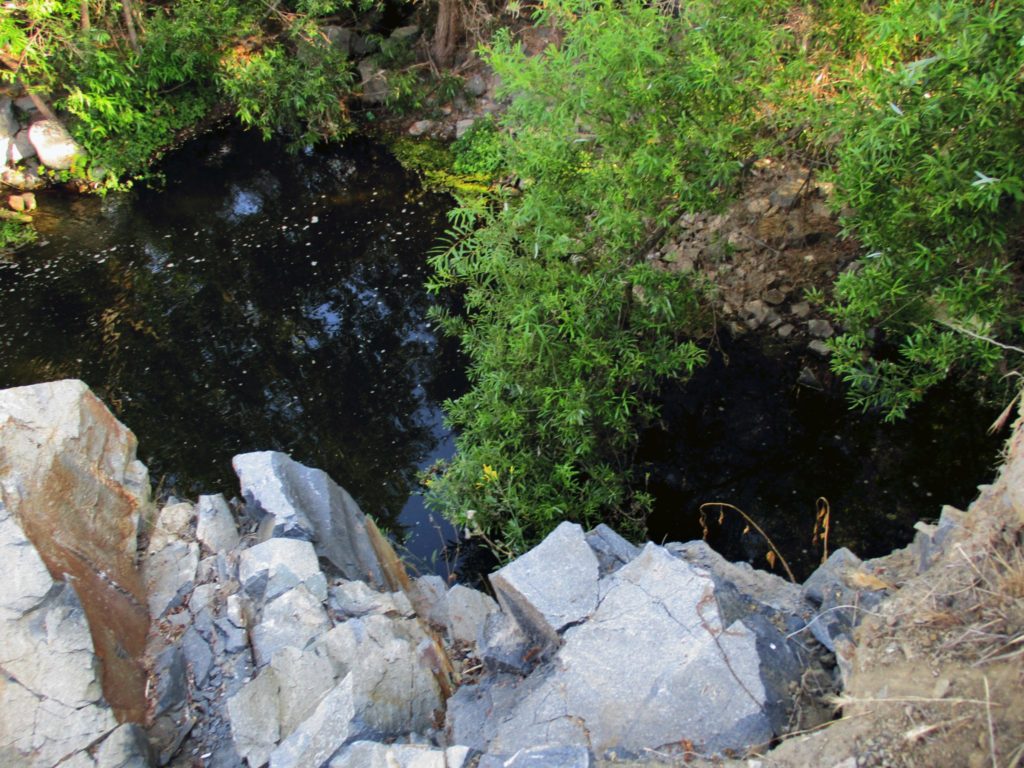 and this. Notice the waterfall on the left? This was that little one I showed you. 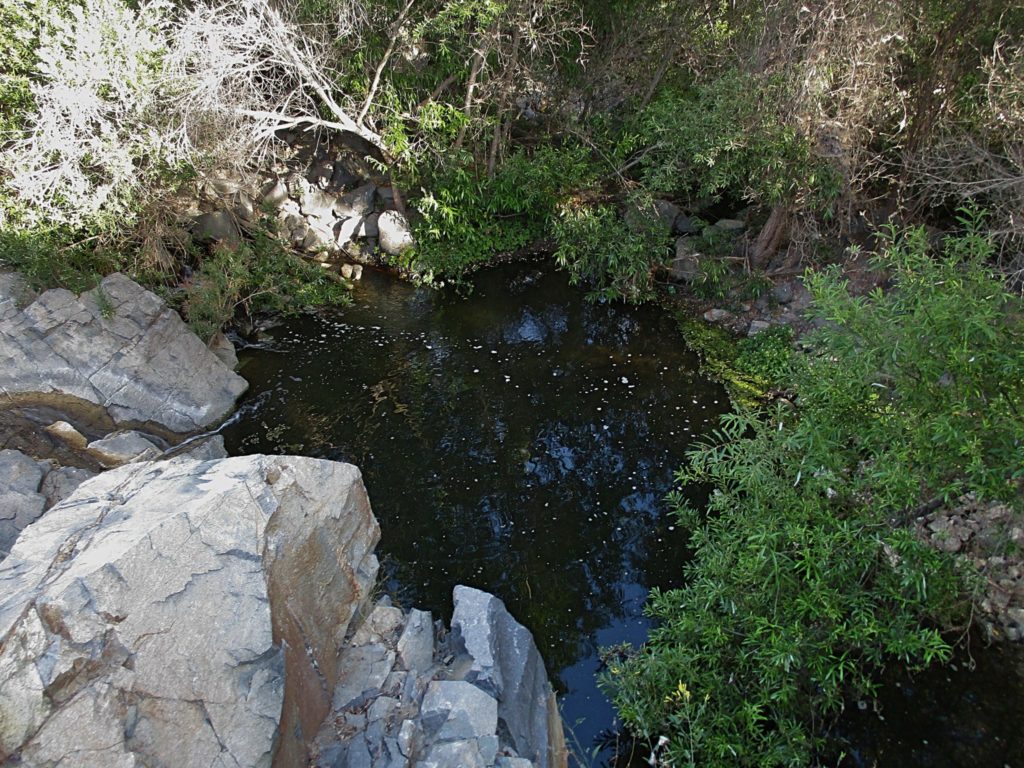 Anyway, he was fishing from up here.. way down into that little pool. 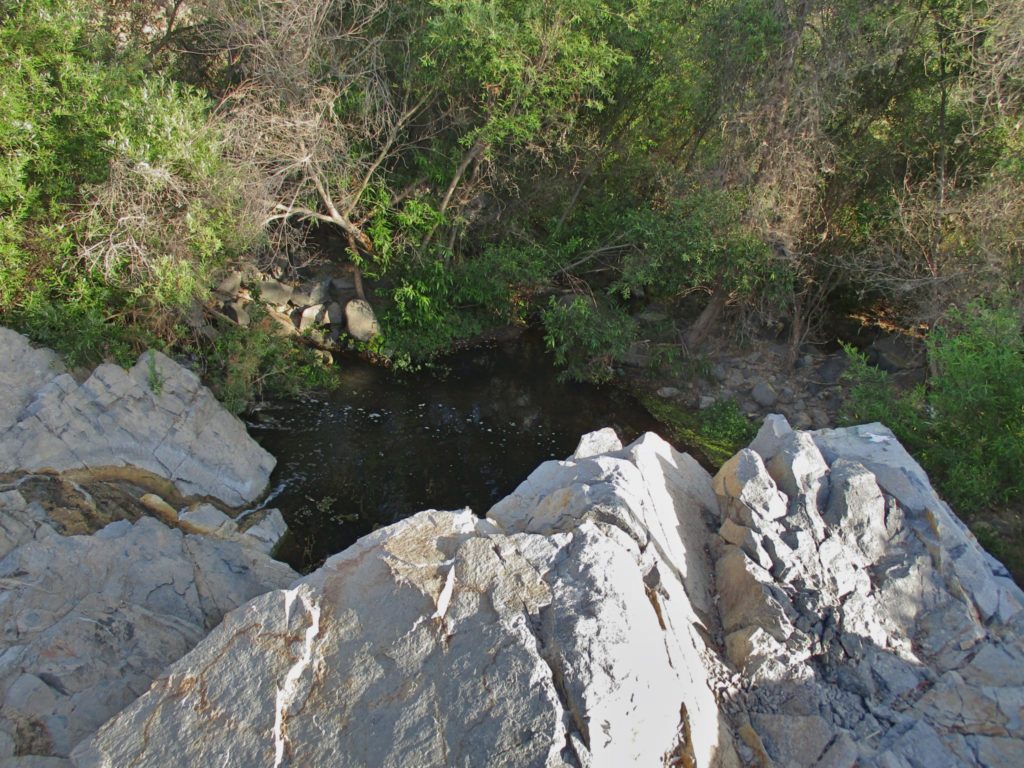 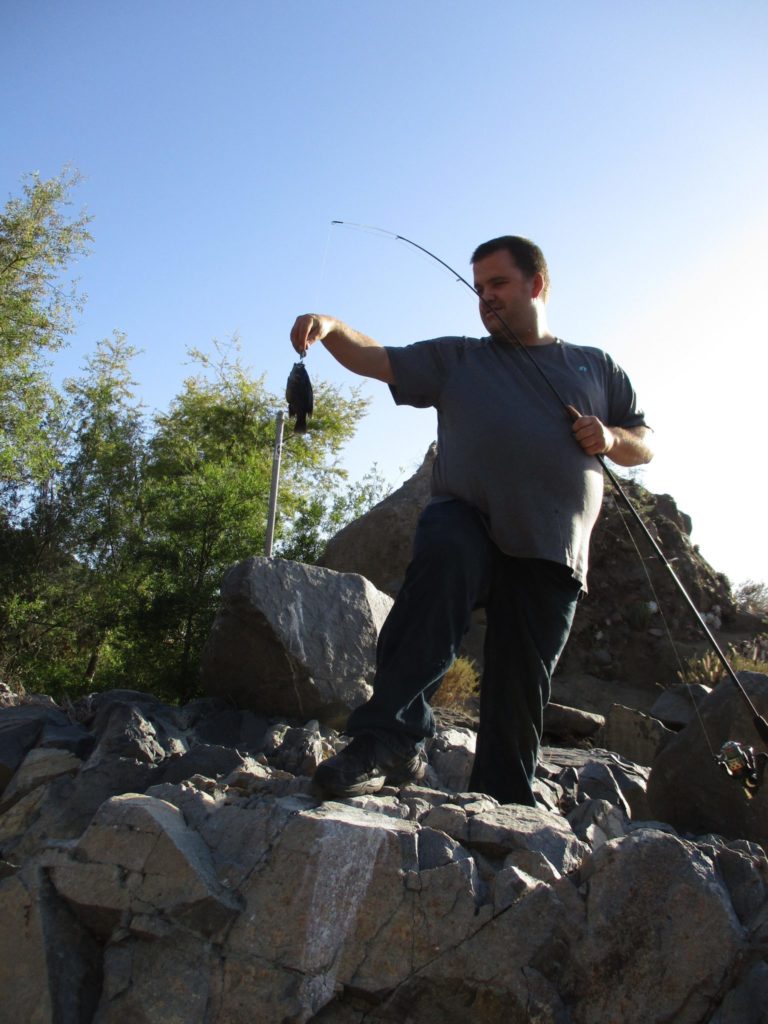 A male Bluegill! This is a sunfish or perch. Other names might be bream, brim, copperbelly, copper nose, sunperch, yellowbelly, bluemouth sunfish, baldface, red-breasted bream, roach and sun granny , among others. 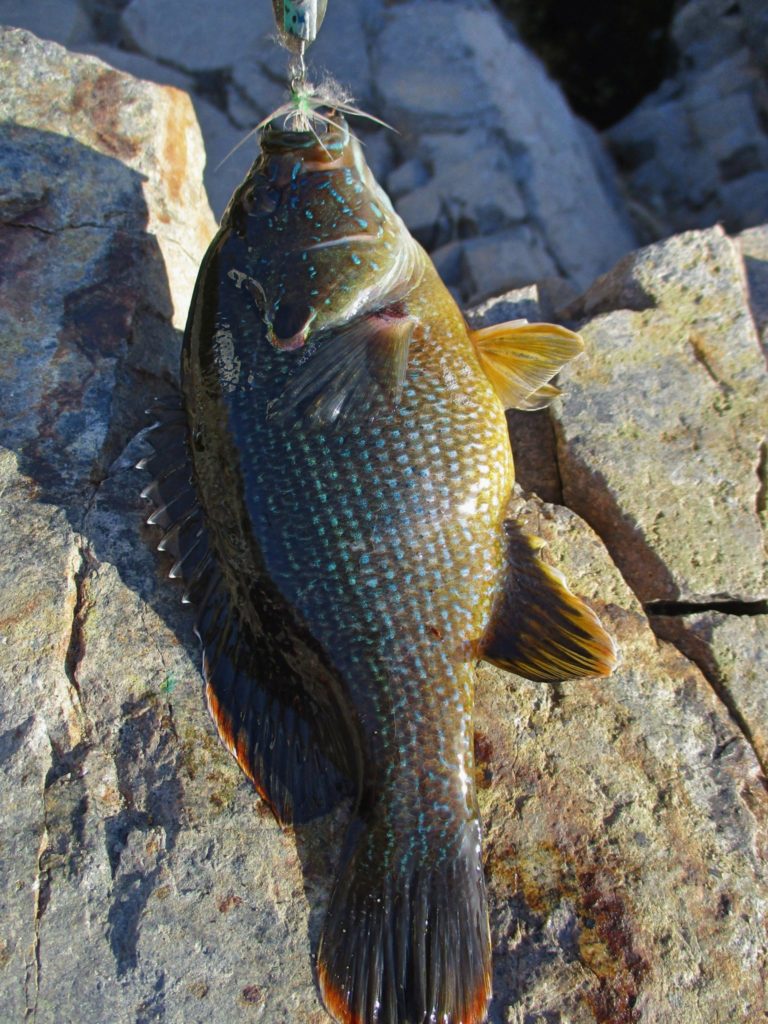 He got a photo and was released. He sure did swim fast when he got back in. Poof, he was gone!

Meanwhile, have you ever had that feeling something or someone was watching you?

I looked up and saw this black lab.  lol. He wanted to come down and play so bad. 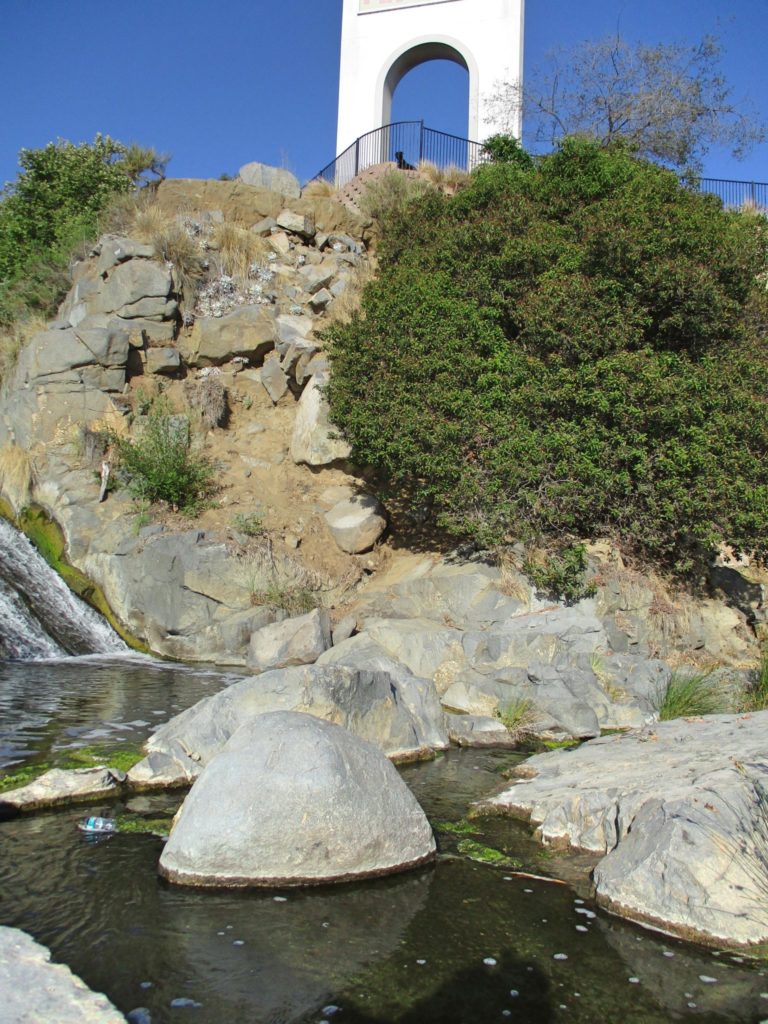 Did you notice the sage green clumps of plants under that sign from above?

Here they are. They are so cool looking. 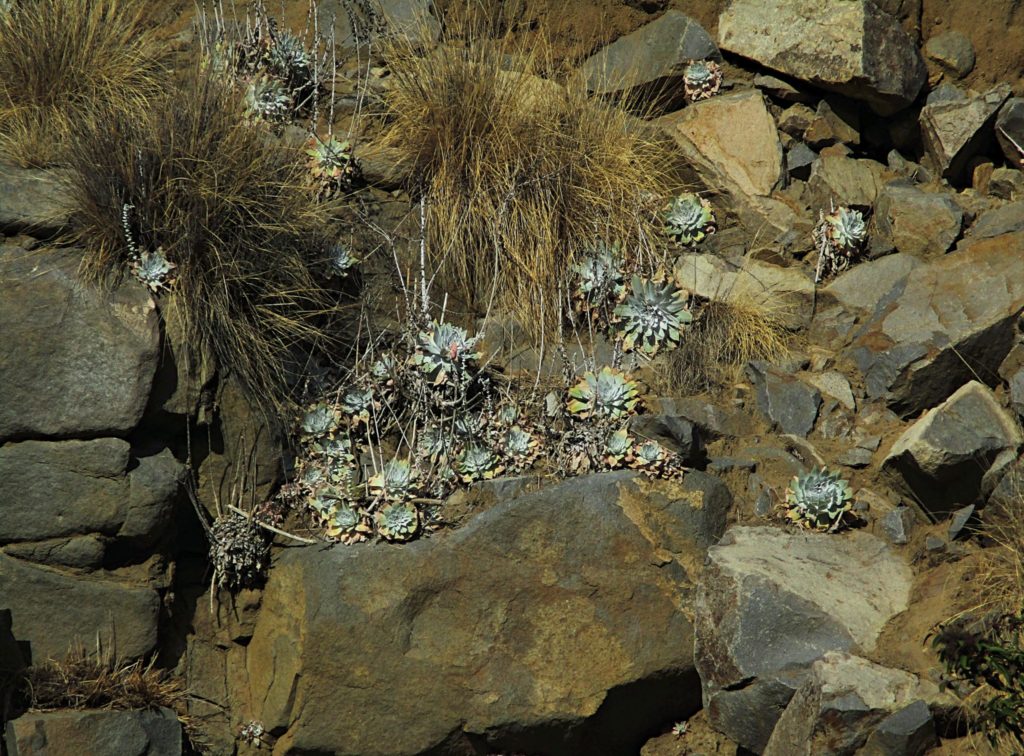 Well it is time to go, Meika giving one last shake of the water before heading back. 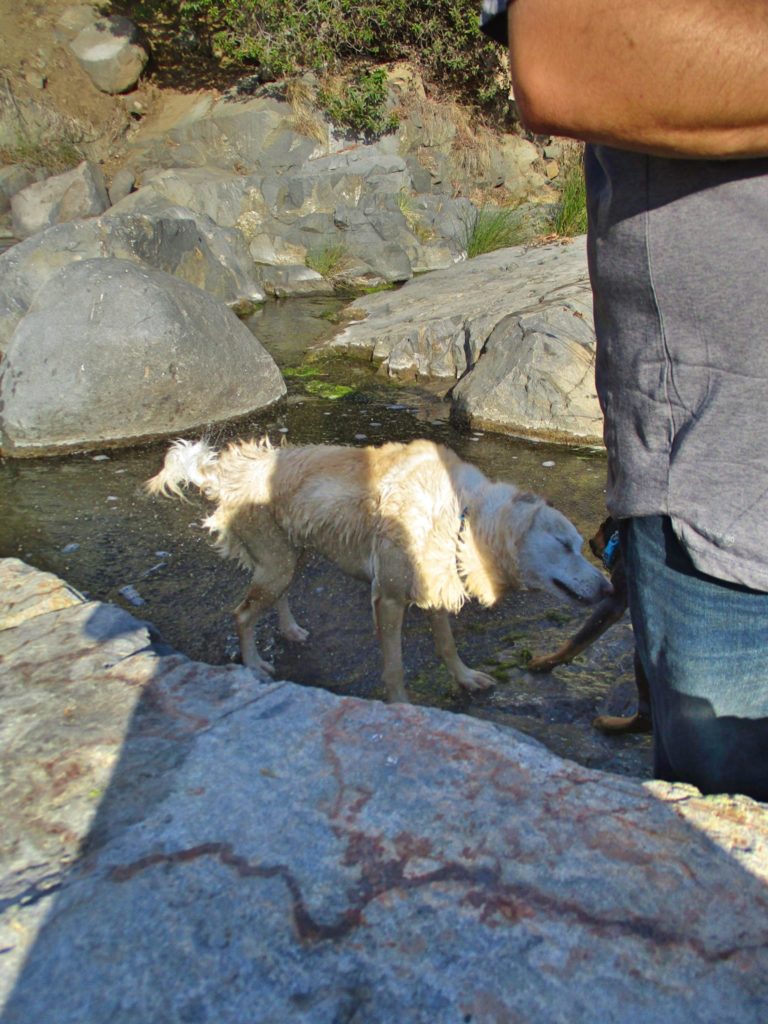 And one last look at El Salto Falls.

Have a great day!